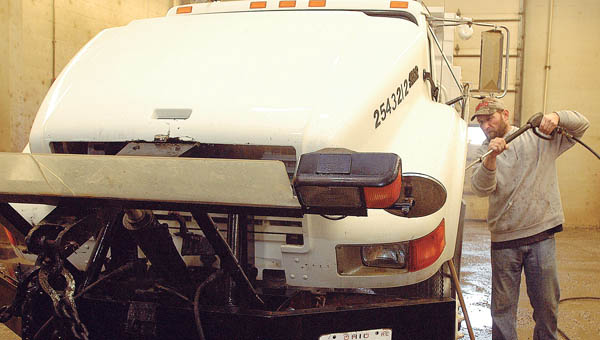 Ryan Bentley with the Ohio Department of Transportation spends the late Thursday afternoon washing dirt and salt from one of the trucks.

Winter has started off strong, with the snow-covered roads keeping motorists cautious and the Ohio Department of Transportation busy.

ODOT’s crew includes some extra temporary employees to handle the increased workload this time of year, allowing a seasonal addition of four new people. However, they were only able to hire three, as it was hard to find an employee with the required CDL license willing to do seasonal work.

There are 10 vehicles clearing the state roads in Lawrence County. The trucks are all dump trucks, with a spreader end gate or dump gate that are changed depending on the needs of the highway. A smaller truck is used to take care of bridges and off ramps.

Mark Malone, ODOT District 9’s Lawrence County manager, said they have their own weather forecast system to make sure they are on top of things.

“We get daily, almost hourly weather reports,” Malone said. “We see if something is coming. We load the trucks with a mix of salt and grit, a smaller stone. The plows are mounted on the trucks when we anticipate a storm.”

If snow is coming, the snow gates are put on and the plows are mounted, so when the snow is falling, they can have people out there, he said. He said during bad weather, they work on 12-hour shifts to have staff available around the clock.

“We have a mechanic on duty 24 hours a day, so if we have a breakdown, we can have them back on the road as quickly as possible,” Malone said.

ODOT’s website states that if weather caused the transportation system in Ohio to shut down for just one day, there would be a loss of more than $300 million in productivity. In addition to plowing, spreading salt on the roadways helps to reduce the slickness.

The amount of salt and grit needed to treat the roadways during a winter storm varies, depending on the amount of snow and the temperature.

“It can be anywhere from 70 tons to 250 tons,” Malone said. He added that traffic comes in to play as well. The amount of traffic on the salted, icy road helps the salt-mixture activate and helps break the ice down. He said this is why heavily trafficked roads clear quicker than equally treated, less populated roadways.

To ensure there is enough salt to care for the roads, the ODOT keeps an abundant supply of it during the winter. The salt shed at ODOT’s District 9 location in Ironton, holds 2,400 tons of salt. The mixing shed, where the salt is mixed with grit, holds approximately 450 tons. In Wilgus, on State Route 141, there is about 650 tons of salt mix there, and in Proctorville, they keep around 1,300 tons each of salt and salt mix.

Malone said they check during midwinter to see if they need to restock any salt to finish out the season.

“With the amount of snow we had in December, I’ll probably have to do that a little quicker this time,” Malone said. He added that patience is appreciated while they try to make the roads safer.

“Everybody should be patient and allow us to go out and get the road as good as we can, as quickly as we can,” he added.

Changing of the Guard

At the end of January David Lynd, Lawrence County Engineer, will retire after 28 years of service and Doug Cade... read more