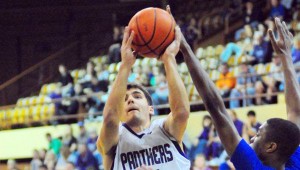 HUNTINGTON, W.Va. — The game appeared headed for overtime as the ball bounced toward the sidelines.

But a whistle blew and a loose ball foul was called on the Chesapeake Panthers that sent Logan’s Paul Williamson to the foul line with 1.7 seconds to play.

Williamson made the first shot for the lead, then missed the second shot intentionally forcing the Panthers to heave a desperation shot the length of the floor that bounced off the backboard.

The foul shot by Williamson gave Logan a 77-76 win over Chesapeake on Monday in the Adidas MLB Classic.

Williamson had tied the game at 76 with a 3-pointer with 24 seconds to play. Chesapeake missed two attempts to win the game and the ball bounced loose toward their bench.

Williamson and Brandon Noble bumped each other going for the ball but Noble was called for a questionable foul.

Logan (6-3) jumped out to an 18-11 first quarter lead but the Panthers erupted for 34 points in the second quarter to take a 45-38 lead at the break as Colin Kennedy scored 15 points in the half.

Logan got within 62-58 after three quarters and came back to take a 67-66 lead on an 8-footer by Williamson with five minutes to play.

Nathan Copley had a putback and then hit Austin McMaster with a pass for a layup and the Panthers were up 70-67.

The Panthers kept the lead with Kennedy making two foul shots with 39 seconds to go that put the lead at 76-73.

Williamson — who scored 37 points — then hit his trifecta and set up the wild finish.

The loss was the first of the season for the Panthers in 10 games who came into the game ranked third in the Ohio high school Associated Press Division III poll.

Kennedy led Chesapeake with 24 points and 10 rebounds. McMaster finished with 18 points, Eric Kennedy came off the bench to score 15 and Copley scored 14.

Deyonte Coleman and Trevor Andrews scored 14 each for Logan.

The Panthers return to the Memorial Field House at 7 p.m. Thursday to play Spring Valley in the Gold Bracket of the Huntington St. Joe Invitational.

By JIM WALKER Tribune Sports Editor Once the Ironton Lady Fighting Tigers got focused, they got down to taking care... read more