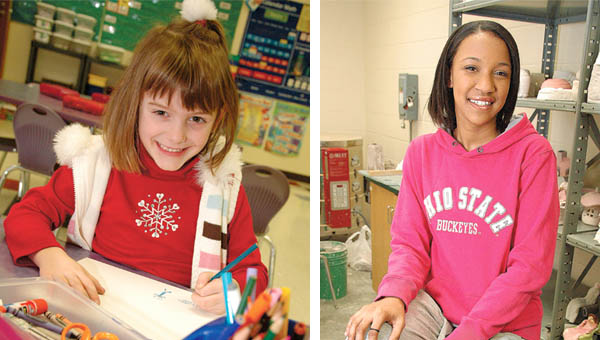 Kindergarten student Samantha Pay, left, of Chesapeake Elementary, and Paige Barlow, right, a senior at Fairland High School have been named the River Sweep 2011 Poster Contest winners for their grades.

CHESAPEAKE — It came about during a Thanksgiving vacation Samantha Pay took with her family.

That drawing was entered in the annual River Sweep Poster Contest and last week the Chesapeake kindergarten student found out she was a winner.

“My sister is an art teacher at Fairland and my daughter’s cousins had won the previous two years,” Susan Pay, Samantha’s mother, said. “We were sitting in a cabin in the mountains doing art. They did it as entertainment.”

“She was so excited,” Pay said. “We couldn’t believe she had won. She loves art. It is her favorite thing.”

Samantha was one of two students in Lawrence County whose poster entries won.

The contest is open to students in schools along the Ohio River, with the intent of creating awareness of the need to have litter cleaned up off the riverbanks.

River Sweep, started in 1989, attracts participants from Illinois, Indiana, Ohio, Kentucky, West Virginia and Pennsylvania each spring. More than 21,000 volunteers give up a Saturday morning to collect more than 20,000 tons of trash from the banks of the Ohio and its tributaries.

Paige Barlow, 18, of Fairland High School took the prize this year in the Grade 12 division winning with her watercolor entry. Paige created her poster as an assignment for an art class with instructor Phoebe Carey.

Work from all students in the class was submitted to the contest.

“It had to be something positive about cleaning up the river,” Paige said. “It had to have both animals and people in it.”

“We had a checklist, different things the composition had to include,” she said. “It was a brainstorm and that is what I came up with.”

Paige, who is deciding whether she wants to study to be a registered nurse or attend art school in Columbus, found out last week that she won.

“I was excited. They said it was over six states,” she said. “It is really big.”

Carey has often had her classes participate in the contest.

“It is really a kind of interesting contest,” she said. “It makes everyone aware of the environment. I was really happy for Paige. Anytime anyone wins any contest, it is acknowledging they are making good art.”

This year’s River Sweep will be Saturday, June 18, and in Lawrence County clean up will take place at the boat ramps at Ironton, Coal Grove and South Point.

Anyone wanting to participate can register at the Lawrence-Scioto Solid Waste District office by calling 532-1231.

“We like to make sure there is a good number of people at each site,” Stephanie Helms of the district, said. “We provide bottled water, bags, gloves and a T-shirt.

“It is very important. There is so much trash that comes into all the areas, especially with the spring flooding. I wish we were able to do it more often. When you see someone out with a River Sweep T-shirt, you know someone took the time to care and go out and volunteer.”

Money will allow department to upgrade radio system With the help of federal grant money, Ironton firefighters will get a... read more