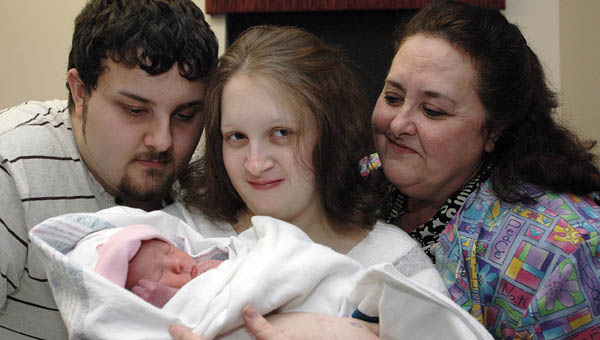 There was panic, until instinct kicked in. Then, between the darkness and the daylight, a miracle happened and the echoes of a newborn’s cries filled a house and the hearts of the family inside.

Just before 6:30 a.m. on Tuesday, Carissa Crockrel and David Radcliff, both 19, became the proud parents of a baby girl, Nevaeh Grace, in quite an unexpected way.

Nevaeh (that’s “heaven” spelled backwards) was brought into the world, not by a doctor in scrubs and a team of nurses in a hospital, but in her own home, delivered into the hands of her grandmother.

“Knowing what’s going to happen from having five children myself and knowing that you know what you’ve got to do and you do it,” she said, although the CNA had never actually delivered a baby before.

Carissa had been awake since around midnight, not being able to sleep from discomfort in her legs. “So I walked around the house, got something to drink. Then I got a shower,” Carissa said. She headed to the couch around 6 a.m. to try and get comfortable. “Then next thing I know, it felt like she was coming.”

Carissa called out for Judy.

“She goes back to lay in the bed and the next thing I know, my son yells at me, ‘Mom, come quick! The baby’s coming!’ I go in there and the baby’s head is already crowned!”

Judy called for her husband, Donald, to get clean sheets. It was almost too late for more sheets because Nevaeh was on her way. Judy knew the ambulance wouldn’t arrive in time and she would have to deliver her granddaughter herself.

“I told Carissa, ‘wait until you get a good strong urge and then give me one strong push.’ And she did and my granddaughter just came out in my hands. She just started crying. It’s just wonderful.”

Five-pound nine-ounce Nevaeh was delivered in about 10 minuets, said proud father, David, who got to cut the cord when the ambulance finally arrived. Mother and daughter were taken to King’s Daughters Medical Center.

“All I can say is, she’s a miracle. Because she came out, she was perfect,” said Judy. “She is the prettiest little girl. I’m not saying that just because she’s mine.”

On Tuesday evening, the entire family visited Carissa and baby Nevaeh in the hospital. Grandpa Donald held her and she seemed to smile, showing her dimples. Donald said the birth at their home was a blessing.

Carissa, tired from the eventful day, said it felt good to finally be a mother, but was still shocked that her daughter came so unexpectedly and quickly.

Judy began to tear up a little as she recalled recent tragedies at their home. Her other son died at the house a couple of years ago at the age of 23 and her father-in-law was killed in front of the house shortly before that. But, she said, the birth at their home signified “a new beginning.”

Nevaeh will return home with her family on Thursday.

With the new election year just weeks old already 14 potential candidates have picked up petitions from the county board... read more