Freeman band to team up with bluegrass star 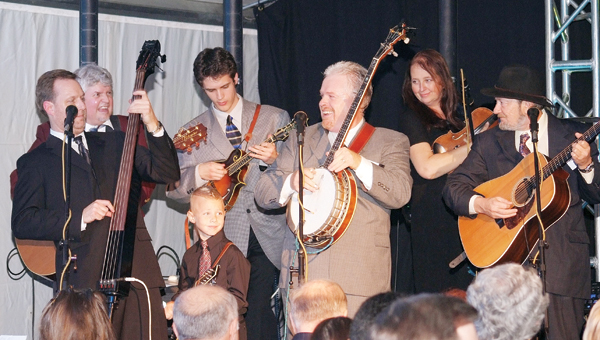 SOUTH POINT — If there is one thing Joe Freeman knows how to do, that’s feel at home on stage. He’s spent a decade or two playing his kind of bluegrass music with his band, Joe Freeman Bluegrass.

But come this Saturday even Freeman admits he might feel a twinge or two of stage fright, at least for a moment. That’s because joining him on stage will be a star of the bluegrass world — Grammy-winning guitarist Clay Hess, known for his youthful version of the traditional music.

Freeman and his band will join Hess at the Blue Ribbon Foxhunters Lodge in Catlettsburg, Ky., starting at 7 p.m.

Hess became a name in the music world when he toured as guitarist for country legend Ricky Skaggs and Kentucky Thunder. With Hess on board Kentucky Thunder was awarded the Instrumental Band of the Year for 1999 and 2000. Hess was awarded a Grammy for his work on the project “Soldier of the Cross” with Skaggs.

“It is very intimidating to play with someone like this,” Freeman said. “Someone like that can elevate your band.”

Freeman met Hess, who is also an instructor at the Kentucky Center for Traditional Music on the campus of Morehead State University, through his son, a student of Hess.

“(The band has) played a couple of times at the Foxhunters and I had asked him since he was in Morehead,” Freeman said. “He is a great guy. He was born and raised in Athens and played a lot at Bob Evans festivals. He was always a nice guy, not one of these uppity artists who have to have their café latte.”

Although there won’t be any time for rehearsal, Freeman says that shouldn’t be a problem, since Ricky Skaggs’ songs will be the order of the night.

At its next scheduled meeting, the Ironton City Council will consider an ordinance that would allow the city to award... read more