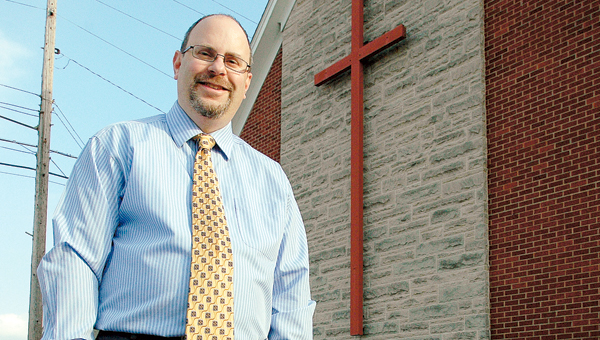 Pastor Charles Case is the newest addition to the Chesapeake United Methodist Church.

CHESAPEAKE — Like the circuitous route of the Ohio River that flows by his pastor’s study, the path to the ministry for Charles Case was anything but a straight line.

Brought up in the small town of Damascus, near Youngstown, Case, the new pastor at Chesapeake United Methodist, thought he wanted a career in radio.

“(The ministry) wasn’t my long-term goal,” he said.

He attended Mt. Vernon Nazarene College where he earned a bachelor’s degree in business administration and communication in 1994. He then went to work at a Christian radio station in Zanesville where he was station operator and an on-air personality. Next stop was another radio station, this time in Newark, where it was more of the same.

Yet slowly Case began to see a new calling for his life.

“I was a lay leader at the Nashport United Methodist Church,” he said. “It was through the leadership there, through the prodding of our pastor …that I heard God speaking to me and encouraging me to explore the ordained ministry.”

He left radio to go to the Asbury Seminary in Wilmore, Ky., a move that for the young man seemed too daunting.

“I was a small town boy,” he said. “Just the thought of moving to Kentucky, that was frightening to me, at first. No relatives. No family. Totally new surroundings at a greater distance from my family.”

However in 2003, he received his master’s degree in divinity from Asbury and got his first assignment as a member of the United Methodist clergy ——— pastor at the First United Methodist Church in Chillicothe.

“That was quite humbling and just a very big challenge,” he said. “My first sermon at Chillicothe, there were definitely some nerves.”

He still remembers the text, the story of Jesus healing Jairus’ 12-year-old daughter.

“My challenge was to show the church to keep hope strong,” he said. “In the midst of times of uncertainty it might seem that God won’t show up, but he will.”

This past summer Case took over the pastorate at Chesapeake United Methodist following the retirement of Darryl Fourman. One of the first things he and his wife did for their new hometown was throw a community party, complete with carriage rides, as a way to introduce themselves to the village.

“The overall goal was to increase the awareness within the community that we are here,” he said. “For the congregation that they become aware of ways of sharing Christ’s love with folks. And for the folks who came we want them to leave with the experience of having known God’s love for them.”

While Chesapeake United is only Case’s second church, he already knows the satisfactions he gains from his new calling.

“It’s helping people to discover and grow into the calling that God has for their life,” he said. “The parishioners and the families I have pastored, when I see them grow in faith and love and hope, there is nothing I can imagine that would be more satisfying.”