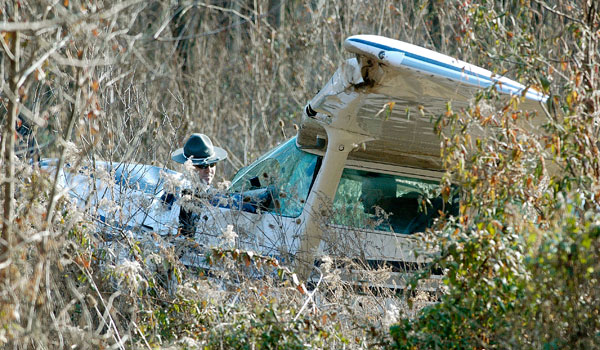 CHESAPEAKE – Federal Aviation Administration spokesperson Elizabeth Isham Cory said it could before several weeks before an investigation into a minor plane crash in Chesapeake is completed.

Two people were injured when the small plane crashed at the Lawrence County Airpark Sunday afternoon.

Scott Bell and his passenger, Carla Bell, both of Huntington, W.Va., received minor injuries in the crash. Minor damage to the plane was also reported.

The crash occurred around 2 p.m. and is believed to have happened well beyond the end of the runway in a wooded area near the Rosemont Village Apartments. It is not known at this time if the plane was landing or taking off.

Jerry Stephenson, a resident of the apartment building, was at his home when he heard the plane overhead.

“This is the third one that’s come in that low today,” Stephenson said. “It sounded like it was coming in for a landing and I heard him start chopping the trees but there was no explosion.”

After the plane went down, Stephenson went to the scene of the crash where firefighters were already tending to the survivors, who were outside of the plane. Officials told him that the man and woman were OK and asked him to leave, Stephenson said.

The Associated Press contributed to this report.