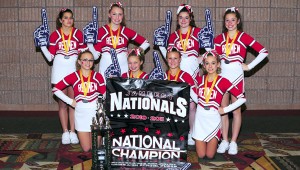 PEDRO — The Rock Hill Middle School cheerleaders were jamming at the Jamfest.

The team was also named the overall Sportmanship Award winners.

The team participated in the Fantasy of Light Gatlinburg Parade during the competition trip.

The girls team has been part of other competitions including Spirit Jam in Columbus and Cheer Thrill in Dayton where they placed first in both events.

Coaches for the girls’ team are Ginger Dalton, Kayla Maynard and Betsy Cox.

Dragons avoid any letdown with easy win over Raceland

The Associated Press The trap was set, but the Fairland Dragons weren’t about to get caught in it’s net. Coming... read more