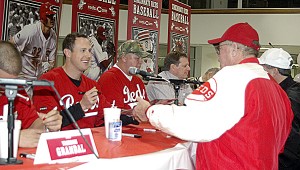 Trying to figure out where Drew Stubbs fits in the Cincinnati Reds’ picture for this upcoming season is quite the conundrum.

Last season he played a role in the Reds winning the Central Division title and making the playoffs for the first time since before the beginning of the 21st century. But what exactly was his role was sometimes hard to figure out, much like this season.

The 6-foot-4, 205-pound Stubbs is one of the fastest players in Major League Baseball. He and pitcher Travis Wood are considered the two speediest men on the Reds.

Stubbs plays centerfield and his defense improved by leaps and bounds as the season went along. So did his hitting. It was his first full season and he admitted that he learned a lot last year.

“Last year was kind of a measuring stick year for me,” said Stubbs.

So what did it measure?

He finished with a .255 batting average that was due to a strong finish after he struggled to even stay at .200 early in the year. He belted 22 home runs to rank third on the team and his 77 runs batted in were the fourth best.

And then there was that speed thing again. He led the team with 30 stolen bases even though he walked just 55 times and struck out 168 times.

Stubbs couldn’t figure out if he was a power hitter or a player who hit for an average and just happened to hit with some power.

The Reds need a leadoff hitter. Stubbs’ speed and ability to steal bases would make him a likely candidate. If he continues to adjust to major league pitching and learns to stop over-swinging in an effort to hit home runs and just make solid contact and let the home runs come, he could be that leadoff hitter.

But if he can hit for power and an average, he could fit into the three or four hole of the Reds’ lineup somewhere in front of or behind Joey Votto, the National League’s reigning MVP.

Stubbs understands he has to improve his game.

“You look across the board and you see how you can improve in every category. Mostly, I just want to be more consistent offensively,” said Stubbs as he made the rounds with the Reds’ winter caravan last week.

There is an up side to Stubbs hitting leadoff, but his style of hitting may be more suited for deeper in the lineup. The signing of former Toronto outfielder Fred Lewis gives the Reds’ another option in the leadoff spot along with outfielder Chris Heisey or second baseman Brandon Phillips.

“I haven’t talked to (the front office or coaches) very much about what they’re expecting of me. It doesn’t matter to me. Whatever is best for the team is what I want to do,” said Stubbs.

“I can steal bases or I can hit for power and drive in runs. I enjoy doing all those things.”

The Reds certainly enjoy Stubbs doing all the above. They’re just not certain what spot in the lineup they want him doing it.

HONOLULU (AP) — MVP DeAngelo Hall had one of his team’s five interceptions and returned a fumble 34 yards for... read more