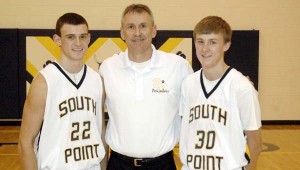 SOUTH POINT — The family that plays together stays together. Well, at least on the basketball court.

And with the Barnes family, there is a lot of extended time together because of their time on the basketball court.

Chris Barnes is not only the South Point Pointers boys’ coach but he’s the father of three sons, all of whom play basketball.

Two of those sons — senior Blake and freshman Brandon — are starters for the Pointers this season putting all three of them together for practices as well as games.

The oldest son, Bryce, is sophomore in college and was a 1,000-point scorer at Groveport Central Crossing where he played for his father before the family moved back to the area last year.

Chris Barnes — an All-Ohio guard at Ironton — understands the problems that come with coaching your sons.

“A college coach once said that your kids better be very good and one of the better players and everyone knows it, or he has to be the type of kid who comes off the bench and is a role player. There is no in between,” said Chris.

The sons have all been better players on the their teams throughout their careers, but dad said it wasn’t an accident. Blake and Brice are both strong shooters from any spot on the court.

“They spend a lot of time in the gym. I’ve seen them make shots a thousand times,” said Chris. “They’re hard workers. Blake will go outside (the day after a game) and was working on his shot.”

Blake has been fortunate to have played on a team with both his brothers. He was a sophomore when Bryce was a senior.

“It’s awesome. You grow up with them and play out in the yard or at the (YMCA). Now I get to play in a game with them in front of a crowd,” said Blake.

“I feel I know them. We’ve got a chemistry going. It’s like you have a sixth sense. You know where they are and you can get an easy assist.”

As the baby brother, Brandon has seen the good and bad of being the last to join the basketball group.

“I get beat up a lot. I don’t know how many times I’ve tried and tried and the come back and crush me,” said Brandon. “But you learn a lot. I got to watch them play before me. They have a lot of stories to help me. They help me a whole lot, but it’s not easy.

“I love it out there on the court. (Blake) is always telling me what to do and where to go. He helps me a lot. He went through the same thing with Bryce.”

Blake has been playing point guard this season with Brandon a shooting guard. He remembers playing with his older brother and the roles were reversed.

“(Bryce) was always more of a scorer and he liked to have the ball in his hands. He’d bring it up and crate and I was the other option,” said Blake.

It has been a learning experience for dad as well. He said Bryce was the guinea pig who took the brunt of the early years.

“The hardest thing I learned from Bryce was not bringing it home with you,” said Chris.

“If I get on them at practice, I can’t bring it home and get on them. If they have a question, I’ll answer it. If they want to watch film and learn from it, that’s okay. But I’m not going to bring the game home with me.”

Regardless of the problems that come from being a coach’s son, both brothers say they enjoy playing for their father.

“I love playing for him. He’s a good coach. He does everything he can to help us win,” said Blake. “It’s not always easy. You definitely have to have tough skin. And he doesn’t always praise you. He’s on our side, but he’s got to rip you sometimes.”

“I like it a lot, but he gets on me even though I’m a freshman. He knows a lot. He’s been coaching a longer than I’ve been alive. But he looks at me sometimes and says, ‘I love you son, but what are you doing?’ But he’s just trying to help,” said Brandon.

Chris said he is fortunate that his sons are good players, but he knows that “people are still going to complain. But my kids have been around long enough that if someone yells something form the crowd it’s not going to bother them.”

More importantly to Chris than his sons being good players has been the time they’ve spent together thanks to basketball.

“I’ve been blessed that I’ve been able to go to work every day and spend a couple of hours a day with my children. Not everyone gets to do that,” said Chris.

Basketball keeps the Barnes family together and that’s been time well spent.

The Associated Press COLUMBUS — Even though one recruit spent Tuesday night in jail and his future is in question,... read more