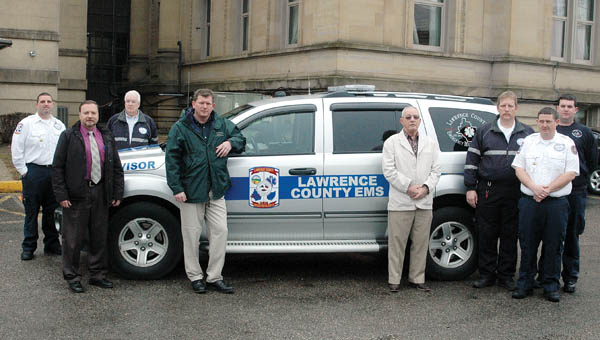 It’s a start. There’s a new vehicle in the fleet of the fledgling Lawrence County Emergency Medical Services.

Last month the LCEMS took delivery of a 2006 Dodge Durango with mileage of 65,000. It will now be used as the supervisor’s vehicle.

“(Supervisors) will go to each station in it. They will also first-respond in it,” Buddy Fry, director of the LCEMS, said.

The on-duty supervisor is required to go daily to each of the five EMS stations throughout the county to do inspections, work on computer problems, even collect the mail.

The vehicle is also equipped with a medical kit, defibrillator and communications unit to allow the on-duty supervisor to assist a squad at the scene.

“They will be able to perform a lot of tasks around the county by being mobile,” Fry said.

The car cost $16,500 and was purchased from South Point Ford.

“The commissioners want to keep business in the county as much as possible,” Fry said.

This was the first major purchase for the new EMS that started Jan. 1 after the dissolution of the four-decade-old Southeast Ohio Emergency Medical Services.

“We have to replace some ambulances,” Fry said. “We have ambulances with 250,000 plus miles on them.”

On average, a replacement ambulance can cost $85,000 and six are needed, the director said. There are 10 ambulances in the fleet with six on the road every day.

“We have discussed it with the commissioners,” Fry said. “I am not speaking for the commissioners but we are trying to wait until we get a steady stream of revenue, which should be shortly.”

Already the EMS has received its first income — $880 from a private carrier.

The EMS’ Medicare application was received on Jan. 28 and approval is expected within 30 to 90 days.

“We are allowed to bill 30 days back retroactively,” Fry said. “We have the whole month covered.”

The service continues to average 26.4 runs a day with a staff of 56 full and part-time paramedics and EMTs.

“Operationally it is working out well,” the director said.

Board of Elections chair plans retirement

Karen Matney Simmons, Lawrence County Board of Elections chair, will be stepping down from her position effective March 31. The... read more