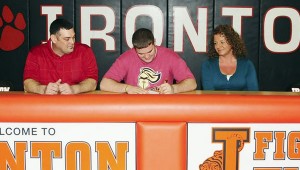 Kentucky Christian University is trying to build its football program. They added a major building block on Wednesday.

Ironton Fighting Tigers’ senior lineman Robbie Webb joined the program by signing a letter-of-intent with the NAIA school and member of the Mid-South Conference.

“They’re still building and I want to be a part of it,” said Webb. “They’re building more facilities as well and they put in Bermuda (grass) and they have plans to add turf. It’s a program that’s only going to grow.”

The Knights graduated half their offensive line from this past season and Webb is expected to get a chance to play tackle.

Joining Webb in the recruiting class will be linemen Joey Reinhardt of Wheelersburg and Kyle Simpson of Portsmouth.

“I like to be with a bunch of guys I all ready know. It will help us jell as a team and create chemistry,” said Webb.

Webb has been a three-year starter for the Fighting Tigers at guard and a two-year starter on the defensive line.

“They have a bunch of open spots. It’s all up for grabs. It’ll be decided this summer and spring,” said Webb.

Furrey was a record-setting receiver at Northern Iowa and played in the XFL and Arena Football League before moving to the NFL where he played with the St. Louis Rams, Detroit Lions, Washington Redskins and Cleveland Browns.

With the Browns, Furrey was both a wide receiver and a defensive back when team’s secondary was racked by injuries.

Webb said Furrey and his staff were key reasons why he picked KCU over other programs such as Malone and Lake Erie College. He also had talks with Toledo and Bowling Green.

“The new coaching staff they brought in is a good staff. Mike Furrey knows what it takes to get to the next level,” said Webb.

“The new strength coach has a really good program. The football program is only going to get better.”

Webb is the son of Charles and Nina Webb of Ironton. He plans to major in sports management. He has two brothers, Adam and Tyler.