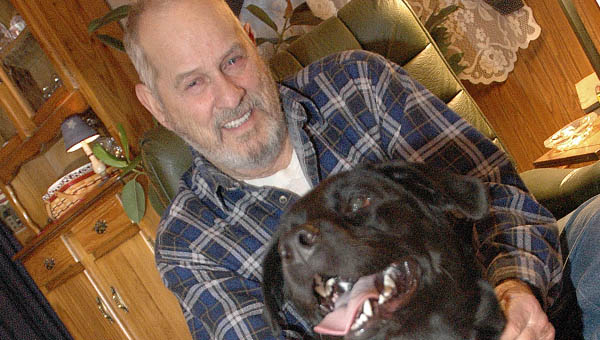 Jerry Gibson, seen with his black Lab Taser, has turned in his revolver and handcuffs to embrace retirement. Gibson has spent the past 31 years as a police officer for the Village of South Point.

Jerry Gibson wanted to be a police officer his entire life, and when he was 26 years old, his dream came true. That’s when he joined the police force in Huntington, W.Va.

For the next 11 years he served the community of Huntington.

With concerns over losing his position, he began to look for other opportunities. He took a job as a forklift operator.

In 1979, he had a chance to go to the police academy and worked a midnight shift so he could attend classes in the evening. He graduated and took a position with the South Point Police Department.

Now, after 31 years in South Point, he has decided it’s time to retire, though he wouldn’t trade his days with the police department for anything.

“I liked the job — patrolling the streets and serving the public,” Gibson said. “I enjoyed it. If I had it to do all over again, I’d do the same thing.”

Gibson remembers his times with the police department with fondness. He once pulled someone over on the ramp of the 17th Street bridge and the suspect was intoxicated and wouldn’t surrender.

“We were out in the median, wrestling around,” Gibson said. He laughed as he told about two troopers who pulled up and after the situation was under control, asking if they had handcuff keys with them, because he had locked himself to the suspect.

Another of his favorite memories was when he pulled over Jean, the woman who would eventually become his wife. She was with a friend on her way home from Huntington, when they ran a yellow light.

Gibson pulled her over, and the rest is history.

Jean Gibson decided to go through the police academy as well, and the year she graduated, 1986, they married. They will soon be celebrating 25 years together.

When asked how he plans to spend his days now, he responded, “I’m going to loaf.”

Loafing isn’t the word for it. He is keeping up with things around the house and does woodworking in the garage with his tools, which has earned him the nickname “Jerry Vila,” after the famous home improvement guru.

He spends much time with his wife, Jean, and his dog, Taser. Gibson also has two sons, Jerry Gibson, Jr., and Mark Gibson, 45, along with three grandsons and a granddaughter.

Taser is a 3-year-old black Lab that they’ve had since he was 5 weeks old, and Gibson describes him as “my pride and joy.”

Before long, Gibson will be back looking after the public, with plans to be a special deputy with the Chesapeake Police Department.

COAL GROVE — A bus driver for the Dawson-Bryant Local School District is on administrative leave after a child was... read more