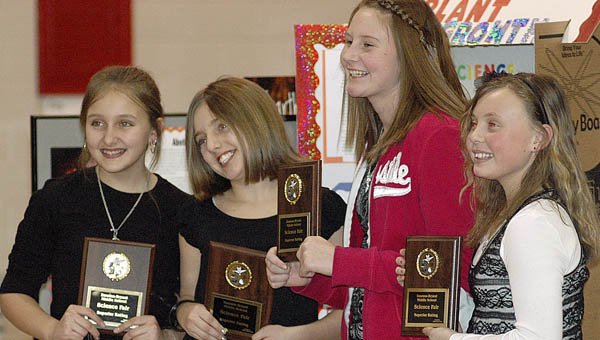 COAL GROVE — On Friday, Dawson-Bryant Middle School announced its contenders for the countywide science fair next week, the most ever from the school.

Close to 100 students participated in the school’s science fair and 56 will advance to the county level on Feb. 10 at Fairland Middle School.

“We’ve had great participation from all the kids. The teachers have been great,” said Rick Barrett, middle school principal.

“Our superintendent, Mr. DeCamp, talked to me last year about trying to encourage more science fair participation so I went and talked to our teachers about it and they said, ‘OK we’ll do that.’ And they have done that and now we’re looking at close to 60 kids going to the (county) science fair,” he said.

Barrett, as well as the science teachers, said they were proud of the effort and participation.

“Our participation has really increased and we’re really proud of the students for wanting to come out and be a part of this,” said Hilary duDumaine, eighth grade science teacher. “Particularly because if they get the experience at this age, as they get into the upper grade levels, science fair is a great opportunity for scholarships.”

Barrett said the cross-curriculum work and extra research the students did helped to make the fair successful and allowed more students to move on to the next level of competition.

“In the past, we’ve only needed one bus,” Barret said. “This year we need two, and that’s awesome.”

These are the students that have advanced to the countywide science fair:

Man gets six months for break-in

An Ironton man who kicked the door in at a car dealership got six months in jail for the crime.... read more