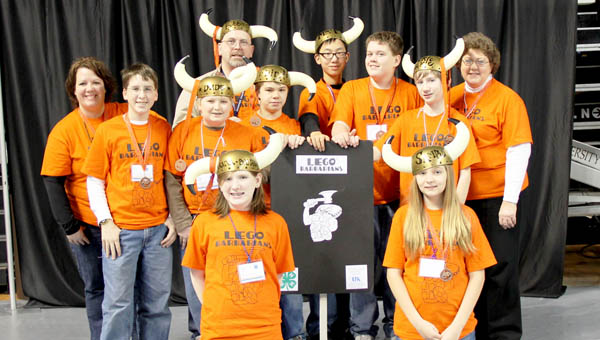 The competition was held at Western Kentucky University in Bowling Green, Ky., on Saturday, Jan. 31. About 310 participants on 43 teams competed in the state tournament at WKU’s Diddle Arena.

The FIRST LEGO League is a program that encourages exploration of science, engineering and computers through the use of LEGO Mindstorms.

On the first day of September, the Barbarians received a box filled with LEGOs and instructions for a project. The teams had until the middle of December to research and build a project for the competition. There are more than 10,000 leagues around the world that compete.

“The core value that we stress every day is the concept of being a gracious professional in all we do,” Reneau said. “The eight kids are from two Greenup County schools and they are some of the best and brightest. It is my distinct pleasure to be a part of that team.”

The team explored biomedical engineering to propose innovative ways to repair injuries, overcome genetic predispositions, and maximize the body’s potential with the intended purpose of leading happier and healthier lives. The project was “Find a Problem with the Human body and Solve it.” Their project was “Body Forward: Engineering Meets Medicine.”

The Barbarians looked at prosthetic limbs and designed a working limb for people from garbage using two-liter bottles, bamboo and old tennis shoes for less than $10. The usual cost of a prosthetic leg is $10,000.

The Robotics Team also had to design and program a robot made of LEGOs to complete in as many as 10 missions under 2 ½ minutes.

After winning the Grand Champion award, the Barbarians were invited to compete at the World Championship Tournament in St. Louis, Mo. in April where they will compete against teams from around the world.

“I am so proud of these kids and what this program is about,” Reneau said. “Working together as a team the way they have is awesome. I am so excited.”

Now, the team has to raise funds so that they can go to the tournament for the competition. For more information or to donate, call Extension Agent Kathy Junker at (606) 836-0201 or e-mail at kjunker@uky.edu.