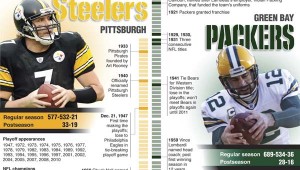 A look at the Pittsburgh Steelers and Green Bay Packers who play in Super Bowl XLV Sunday.

ARLINGTON, Texas — NFL commissioners can’t root, so Roger Goodell will just sit back and smile as he watches this Super Bowl.

A season that saw pro football claim boffo TV ratings and reach new heights of popularity — even as it dealt with a stream of off-field woes — will end with two classic, hard-nosed teams clashing in its championship game.

“When you look at this matchup,” Goodell said, “and you say Pittsburgh Steelers and Green Bay Packers — that’s football.”

“This isn’t just about fans in western Pennsylvania or Wisconsin. They have national followings. And I think that is what’s so exciting for this country and the whole world. This is fun. This is celebrating the game that I love, that we all love, and I think this is going to be a terrific night.”

It’s hard to argue with the mystique and tradition that comes with this one, stretching all the way back to football’s blue-collar roots.

The Steelers (14-4) already own the most Vince Lombardi Trophies (six), which must gall their opponents from Titletown USA. Pittsburgh goes for its seventh Super Bowl title Sunday at Cowboys Stadium. Green Bay (13-6) has three, taking the first two Super Bowls under Lombardi’s guidance, and winning another in 1997. The Packers also took six NFL championship games before there was a Super Bowl.

What’s funny, in this age of tweeting players and 24/7 Super Bowl week coverage, is that these teams would probably look familiar to the Steelers and Packers of 1933, the first year both franchises were in the league.

Both the Packers and the Steelers have 16 homegrown starters.

Each has a dynamic defense led by the top two vote-getters for Defensive Player of the Year, Steelers safety Troy Polamalu and Packers linebacker Clay Matthews, the runner-up. Both have playmaking quarterbacks who have risen to elite status — although in entirely different manners. Just as the two teams went about getting to the Super Bowl in opposite ways: Pittsburgh as a division winner and second seed that won two home games, the Packers as a wild-card that hit the road for three victories over division champs.

Through it all, there’s that history of success that bonds the Rooney family-owned Steelers and the community-owned Packers.

“Coach (Mike) Tomlin uses the term with his players,” Green Bay general manager Ted Thompson says of the Steelers coach. “He says, ’The standard is the standard.’

“Quite frankly, that philosophy seems to fit pretty good with us, too.”

Yes, there’s the Steelers Way and the Packers Way. Through the Lambeau, Lombardi and Holmgren years in Green Bay, the Noll, Cowher and Tomlin years in Pittsburgh, the common thread has been sticking to your roots no matter how bumpy the journey.

The players recognize how different these two franchises are from the other 30 teams.

“I think the first thing you look at is there’s no owner, so a lot of the fans consider themselves owners and personally invested,” says Packers quarterback Aaron Rodgers, who’s had a spectacular postseason. “A lot of them are personally invested in the team. It’s a college-like atmosphere in Green Bay. Everywhere you go you see green and gold, it’s a first-name basis, and there’s just a special connection that’s always been there between the players and the fans.”

Of course, there are no other pro teams in Green Bay. Even though there are two in Pittsburgh, the Penguins and Pirates, the Steel City’s true love affair is with the Steelers.

“It’s awesome,” says quarterback Ben Roethlisberger, who tested that relationship more than any player when he was accused in March of sexually assaulting a 20-year-old college student — the second time since 2008 he faced assault allegations. Georgia authorities declined to bring charges, but he was suspended for four games at the start of this season for violating the NFL’s personal conduct policy.

“I don’t want to say we’re used to it because we don’t want to take it for granted, but everywhere we go there are Steelers fans and they’re awesome. That’s why I will sit here and say until the day I die that I feel that Steelers fans are the best fans in all of sports, bar none. I know we’ve got a team whose fans are going to want to argue that because Packers fans are great, too, so that’s why I think this is the awesome matchup. You’ve got two really good football teams, you’ve got two great fan bases and you’ve got two storied franchises. From top to bottom I think this is an awesome matchup for the league.”

A matchup that could come down to which offense can impose a bit of superiority over an immovable defense.

No one has run efficiently on the Steelers, and Green Bay’s running game ranked 24th this season; it’s improved behind rookie James Starks in the playoffs, but hasn’t faced a defense like this.

Pittsburgh’s Rashard Mendenhall starred in the AFC championship victory over the Jets, rushing for 121 yards. The Packers, though, aren’t likely to forget how to tackle the way New York did.

Both sides have excellent receivers, including deep threats in Green Bay’s Greg Jennings and Pittsburgh’s Mike Wallace, and wise veterans in the Packers’ Donald Driver and the Steelers’ Hines Ward.

But the secondaries are strong, led by Polamalu — “you have to know where he is on every play,” Rodgers says — and Green Bay’s Charles Woodson.

If it comes down to the quarterbacks, each team will be fine with that. Rodgers has been unstoppable in the last five games, all must wins. Roethlisberger would join Tom Brady and Troy Aikman with three Super Bowl rings, and he’s only in his seventh pro season.

Regardless, the wintry weather — snow fell Friday for the second time during Super Bowl week — made both teams feel at home. As well they should, given their championship pedigree.

By JIM WALKER Tribune Sports Editor HUNTINGTON, W.Va. — Ability is controlled by God. Effort and attitude are from within.... read more