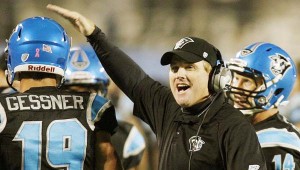 Jay Gruden is the Cincinnati Bengals’ new offensive coordinator. Gruden was the former head coach of the Florida Tuskers and Orlando Predators in the Arena Football League. He is the brother of former NFL coach John Gruden. (MCT DIRECT PHOTO)

Gruden was in town Monday to start teaching his philosophy to the rest of the coaching staff. He’s implementing a far different offense — totally new terminology — on a team unsure about its franchise player.

Palmer asked for a trade following a 4-12 finish that left the Bengals with only two winning records in the last 20 years. Owner Mike Brown refused, creating the possibility of friction at the most important position while the team changes offenses.

The 31-year-old quarterback made his surprising trade request after the Bengals finished another dreadful season and Lewis agreed to return as head coach even though Brown promised no significant change in how the organization operates.

Longtime offensive coordinator Bob Bratkowski was fired a few weeks later, the only change so far. The rest of the staff is intact.

Gruden is basing his offense on the assumption he’ll have Palmer running it.

“Until I hear something different, we’re going to go forward with him as our quarterback,” Gruden said. “That’s the only approach I can take right now. Whether it’s right or wrong, I do not know. But that’s the way I’m going about things.”

There’s a lot of uncertainty as the offense starts its transition. Top receiver Terrell Owens is a free agent unlikely to return. Receiver Chad Ochocinco has a year left on his contract but is at odds with Lewis. Running back Cedric Benson also is a free agent, turned off by the team’s decision to throw more last season.

With uncertainty over the collective bargaining agreement, Gruden isn’t sure how much time he’ll have to teach the new system to whoever is on the roster.

Last year, he was the head coach and general manager of the Florida Tuskers of the UFL. The Tuskers ceased operation on Jan. 12, and Gruden was moving to head coach of the UFL’s new Virginia franchise when the Bengals showed an interest.

“It came when I didn’t really expect it,” Gruden said. “I never really have actively pursued an NFL job — not because I didn’t want to get in the NFL, but because I was happy where I was.”

Lewis decided the Bengals should evolve into a run-first offense in 2009, and they won the AFC North. They tried to become more diverse last season, bringing in Owens and throwing more often. They never made it mesh, losing 10 games in a row.

Gruden hasn’t received any overriding direction from Lewis on how to run the offense.

“He’s the head coach, so whatever vision he has is my vision,” Gruden said. “If he has a vision of running the ball 30 times, then that’s going to be the vision. We’ll do the best we can to appease him. But there’s been no vision that’s been told to me right now. It’s just come on in here, install your offense and let’s make a change.”

Lady Tigers too passive in loss to Hunt. St. Joe