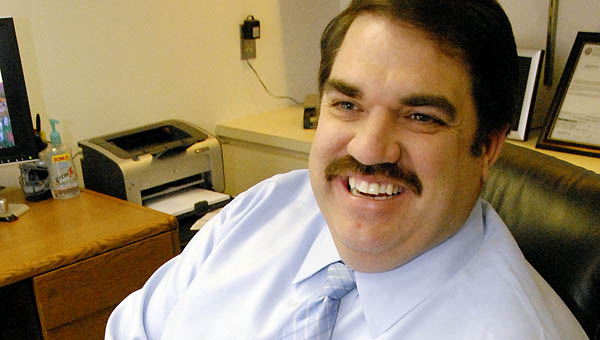 Lawrence County Engineer Doug Cade at the start of his term.

With a couple of ficus plants from home and some white paint on the walls, Doug Cade is settling in as the new county engineer.

Cade, formerly with E.L. Robinson, was appointed acting engineer in January following the retirement of David Lynd. Cade is expected to be named to the post permanently next week when the Republican Central Committee meets.

Already he has developed a philosophy for how he sees his new job.

“The role of the county engineer is to make sure we have a safe transportation system of roads and bridges. That is the number one role,” Cade said.

There are 380 miles of county roads, 600 county and township bridges and tens of thousands of culverts that Cade now had to make sure are maintained to the best of the ability of his crews within a roughly $4.5 million budget.

“We have to determine what our needs are and we do that constantly through road repair requests and employees being out and seeing what is going on,” the engineer said. “We bring those in and prioritize.”

And it’s the public sector that can help Cade do his job the way he thinks is best for the county. Already the engineer, who believes in an open-door policy, has had county residents come in to see if their road problems can get resolved.

“Part of my job is dealing with the issues of the public and we have had several people come in in the last few days,” Cade said. “If I am available, I am glad to talk with them. I might not give them the answer they want.”

And he just might not be in the office when they call. Getting out and about is as much a part of the engineer’s job as working behind his desk. Cade is down at the county garage on Third Street each morning by 7:45 to discuss with the crews what needs to be done that day and review future projects. Then he may stop in his courthouse office before going out to check on road conditions in person.

“My intention is to be out in the field as much as necessary,” he said.

“We went through the next round of Issue One ratings last week and we got approved for $1.4 million in paving projects that included some township roads,” Cade said.

He anticipates 15 miles of county and township roads to be paved by Christmas. That work will be contracted out this summer.

“We will continue a lot of projects that Mr. Lynd started and continue to improve the roadways of Lawrence County,” Cade said.

Ironton’s Rotary Club will be serving up breakfast for the community this weekend. The club’s annual pancake breakfast fundraiser is... read more