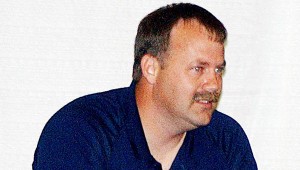 The 42-year-old chiropractor admits that he has a taste for fun that isn’t normal for most people.

Nichols is currently the co-owner of the new Huntington Hammer arena football team. It comes on the heels of his last toy, co-ownership of the now-defunct Huntington Heroes.

“I give a lot of credit to my wife, Missy. I love her and she puts up with me. I just like to have fun. I just wish that what I liked to have fun with made more money,” said Nichols with a laugh.

Nichols’ first toy, the Heroes, was a joint venture with Greg Ramey. But he sold his stock early in the team when the two could not agree on how to operate the franchise.

“We were straight up 50-50 owners when we started, but I saw the handwriting on the wall early that it was not in my best interest to continue so I let him buy more shares and then I got out completely,” said Nichols.

The 1986 Rock Hill graduate thinks this time his “toy” project will work because he has teamed up with Cecil Van Dyke, a businessman from Georgia who shares his vision for running the team. Plus, Nichols said his past experience has enabled him to see the pitfalls of running an organization.

“One thing you don’t want to do is overshoot yourselves. We’re not an NFL team. We don’t have that type of finances,” said Nichols.

“We can’t act like (Dallas Cowboys’ owner) Jerry Jones and spend thousands of dollars every week. It’s difficult when you get involved in this because the bills can really mount up quickly. You can spend $10,000 and have nothing to show for it.”

The Huntington Hammer is an original member of the Ultimate Indoor Football League. They begin their season at 4 p.m. on Sunday, Feb. 20, against the Canton Cougars at the Big Sandy Superstore Arena.

Unlike the Heroes and the American Indoor Football Association, Nichols said the UIFL has guidelines for all the teams to follow.

“It gets back to the structure of money. (The UIFL) follows a salary cap. It’s strictly enforced. They want everyone on the same page,” said Nichols.

The Heroes began to run into trouble when some players were promised more money than others and others teams were promised an excessive amount of money to play at Huntington.

“When we purchased the first franchise with the Heroes, the biggest problem we had was (Ramey) want to spend a lot of capital. The league said the money will come,” said Nichols.

“We had three road games to start the season. We spent thousands of dollars on travel alone and you can’t do that. The structure of pay doesn’t work that way. Cecil knows his limitations. He’s there for the entertainment. Our goal is to break even. If we make money, that’s even better.”

Nichols — who handles the medial aspects of the team — wants the team to be successful but that means something different to him than just making money.

“Being successful is not losing money. You’re not going to get rich,” said Nichols. “I enjoy it personally because I love sports. It has nothing to do with ownership. It’s something for my kids to do and their friends. It’s more about entertainment than anything.

“My involvement with this team is very guarded. I was lucky to help out in places and be involved the way I am. I’m not a rock star. I’m just Bill Nichols.”

And Bill Nichols is a successful man who likes big toys.