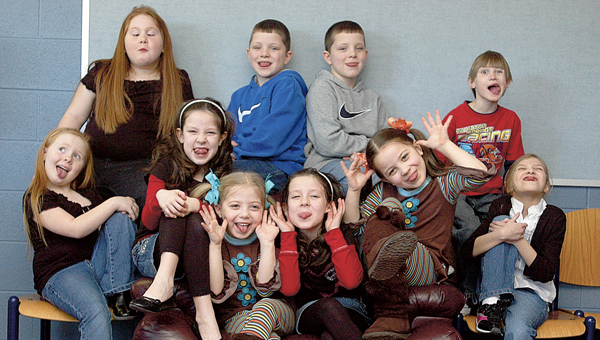 THE TRIBUNE/JESSICA ST JAMES Double trouble times five. These five sets of twins are constant sights in the halls of the Rock Hill Elementary School as they all are in the first grade. Pictured back row, left to right, are Kaley Fetty, Kaleb Bevins, Ethan Bevins and Nicholas Webb. Bottom row, pictured left to right, are Haley Fetty, Alyssa Williams, Ashlie Howard, Abigail Williams and Whitney Howard.

PEDRO — The students and staff at Rock Hill Elementary are seeing double, and with good reason.

Of the little more than 100 students in its first grade class, there are five sets of twins.

“I’ve (taught) twins down through the years but to have this many in one grade is rare,” teacher Becky Sanborn said. “I’ve always enjoyed having them. I get tickled because it usually takes both of them to tell a story. They both have to give their input.”

First there’s Nicholas and Sophia Webb, daughter and son of Kathy and Lindsey Webb. The twins were adopted from Russia when they were babies. They said they like to play video games together. “(I like) playing in my playroom and doing something special like playing Pacman,” Sophia said.

Though teachers obviously never have a problem telling this brother and sister pair apart, with some of the other twins the differences are not as obvious.

Abigail and Alyssa Williams, daughters of Ryan and Stephanie Williams, are identical twins with matching brunette hair. The twins say they sometimes switch seats with one another to confuse the teachers.

It’s only by the freckle on Abigail’s face that the teachers determine which of the sisters is which. But while the world may only see their similarities, the girls point out that they are different in some ways.

“If you ask us what it’s like to be a twin I would say I don’t know because it’s all I’ve ever been,” Ashlie points out.

Ethan and Kaleb Bevins are the sons of Todd and Katie Bevins. The identical twins like to play outside and are involved at their church.

“I have a hard time (telling them apart) still yet,” teacher Kay Wheeler said. “They usually don’t dress alike. Ethan has a vein on the side of his nose that’s how I know. In the room if they’re in the right seat, I’m good.”

Lastly, there’s Haley and Kaley Fetty, daughters of Amy and Orie Fetty. Teachers don’t have much difficulty telling apart these fraternal twins with long red hair either, as there is a height difference between the two. They say they like to dress alike sometimes, however.

Wheeler, who teaches Sophia and the Bevins boys, said the most difficult part about teaching twins is telling the boys apart.

“I was a little concerned at first that with them being together of how they would not want to be separated from each other but they do really well,” Wheeler said. “They like knowing where the other one is all the time but they don’t mind being separated. As far as doing group work, they’ll go to another group. Once school started it didn’t take long to see that it wasn’t going to be a problem with them wanting to be together.”

The teachers also say the pairs often earn grades that are within a few points of one another. Sometimes if both are taking a spelling exam, the two will miss the same words.

“Sometimes they’re like magnets to each other, when they do get to a playground where they can be with each other. But then at times they have little scuffles and you have to separate them,” Wheeler said.

From left, Brothers Alex, Tyler and Nathan Payne have each earned the highest honor of Boy Scouts, the Eagle Scout.... read more