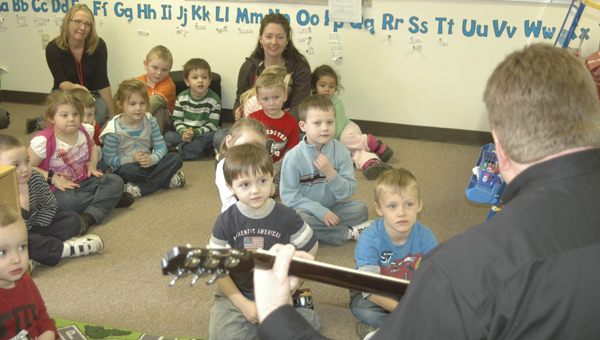 The Tribune/Michelle Goodman Richard Palmer of the Ohio Fire Marshal’s office plays a fire safety song for the children at the Proctorville Head Start center.

PROCTORVILLE — Thanks to donations from some serious safety advocates, pre-schoolers in Lawrence County will be getting a head start in learning fire safety.

The 3-, 4- and 5-year-olds were also treated to a sing-a-long by Richard Palmer, assistant chief of fire prevention for the OFM.

Palmer brought his guitar to sing songs about firemen and how to get out of a burning house.

When Palmer sang, “When the smoke’s above,” the children completed the line with a resounding, “Stay down low!”

Palmer explained that “Mr. Smoke” rises in the air and the children should get on their hands and knees to “stay low and go.”

Palmer, who has taught fire safety for 22 years, said he wanted to use music to teach the children to help retain the message. His album of songs, topics of which include fire safety, playground safety, stranger danger, matches and lighters and school buses, has been a 20-year effort for Palmer.

“With any safety message, if they learn it young, they carry it through life,” Palmer said.

Firefighters from the Rome Volunteer Fire Department joined Palmer and the others from the OFM. Fireman Richard Kern wore his fire suit and oxygen tank for the children to see. The children also got to see the inside of departments fire truck.

The OFM donated 30 of Palmer’s CDs so all 10 of the Head Start schools in the county can benefit from them.

Mike Boster, director of Lawrence County’s EMA, represented the agency to donate a Sesame Street Fire Safety Station book and cassette to each of the 33 classrooms in the county.

The donations came to the school through their new partnership with the local fire departments and the EMA. The program, Partner in Prevention Education (PPE), is a collaboration to advocate fire safety and was started after Lawrence County was named the highest in the state for fire-related deaths.

Phyllis Newman, family and community partnership manager at the Lawrence County Early Childhood Academy, said fire safety is a number one priority and it is even a requirement for families with child in the Head Start program to have working smoke detectors.

“Our goal is to make sure every family here in the program has a smoke detector,” she said. “It has been overwhelming the amount of families that don’t have them. I have a waiting list right now.”

Newman said if anyone was willing to donate smoke detectors, they could contact her at 534-2641.

Likewise, Boster said the EMA is looking for more partners for the PPE program. If anyone is interested, they should call the EMA at 534-5803 or contact a local fire department.