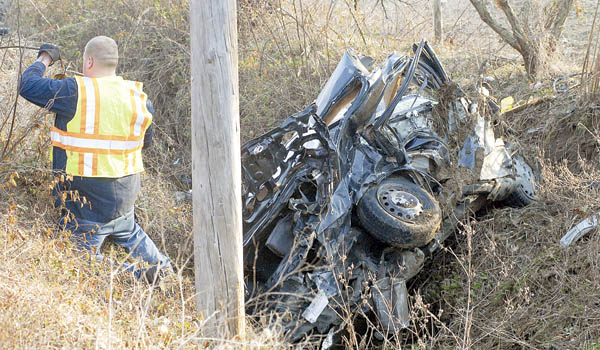 THE TRIBUNE/JESSICA ST JAMES A worker is seen fixing cable lines to a black Honda early Thursday morning at the five mile marker of 141. The driver of the Honda Adam Kuehne failed to negotiate a turn while traveling west bound State Route 141 and crossed into a white Pontiac car traveling eastbound. Kuehne was pronounced dead at the scene.

KITTS HILL — A fatal accident that claimed the life of a Rock Hill High School student remains under investigation by the Ohio State Highway Patrol.

The Civic then flew across a ditch and hit an embankment, according to Lt. Michael Gore of the patrol.

The accident happened four-tenths of a mile east of milepost 5. Kuehne was alone in the car. Investigating officer was Trooper Robert McClelland.

Whose road is it?