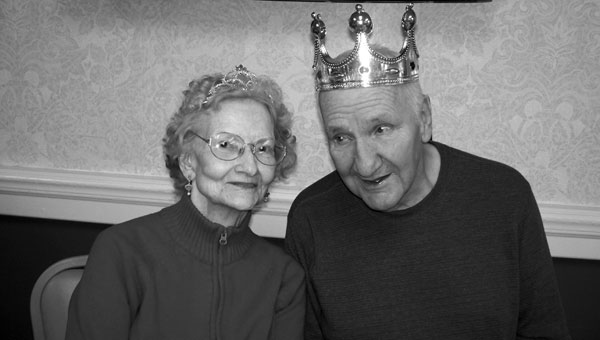 Loretta Copley and Tom Eidson celebrated their coronation as queen and king of the Valentine’s celebration at River’s Bend Skilled Nursing and Rehabilitation Center.

SOUTH POINT — Valentine’s Day was celebrated with the crowning of a king and queen, dancing, singing and refreshments for the residents and their visiting family members at River’s Bend Skilled Nursing and Rehabilitation Center.

Eighty-one-year-old Loretta Copley and 71-year-old Tom Eidson were selected to be this year’s queen and king. Crowns were placed on their heads and they sat at a special table. The couple delighted their peers by performing a waltz.

“It couldn’t have been any better,” Loretta Copley said.

Music was provided by local singer Carlos Leap, who donated his performance as part of his outreach ministry.

“I do this because I’m called,” Leap said. “I enjoy seeing how the music uplifts people and makes them smile.”

Leap’s natural voice sounds remarkably like Elvis Presley and he sang several of Presley’s love songs accompanied by a karaoke soundtrack, including, “Love Me Tender,” and “I Can’t Help Falling in Love With You.” Leap also sang the Willie Nelson hit “You Were Always on My Mind,” and the Keith Whitley ballad “Don’t Close Your Eyes.”

The crowd also enjoyed the gospel songs he performed, including “He Walks With Me,” “May the Circle Be Unbroken,” and “Amazing Grace.”

Leap walked around the room sharing the microphone and encouraging guests to sing and clap. He concluded the program with Frank Sinatra’s “My Way.”

Leap enjoys performing at local nursing homes, churches and schools. He was back at River’s Bend by popular request after he delighted residents at a New Year’s party.