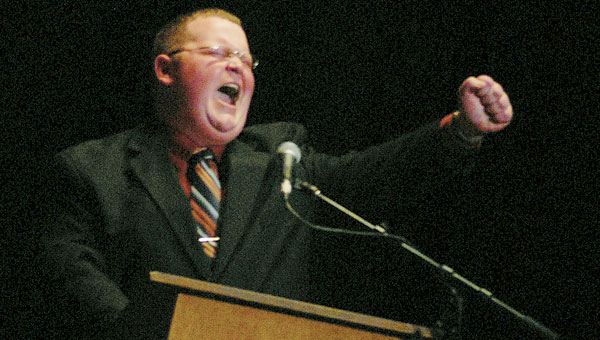 Rick Skeens speaks at the STAND-UP, an acronym for Standing Together Accepting No Division United for a Purpose, forum that was presented Friday at the Paramount Art’s Center in Ashland, Ky. It was an event to bring churches and the communities in the Tri-State together to fight drug addiction.

ASHLAND, Ky. — Once upon a time Johnathan Hughes was a junkie, an armed robber and a convicted felon. Today he is an evangelist telling audiences how the power of God changed his life for good.

“God came and met me in a secular AA program inside an prison and radically changed my life,” Hughes told an audience at the Paramount Arts Center Friday night.

Hughes was there to tell his story as part of a grass-roots effort to bring churches and the communities in the Tri-State together to fight the epidemic of drug addiction.

By the time Hughes was 18, he was facing a possible 40 years in prison for first- degree armed robbery.

“My life at the moment was over, but God had a better place for me,” he said.

Hughes made his breakthrough during an 11-month prison term where he developed what he called a deep relationship with Jesus Christ.

“He flipped it upside down and radically changed every facet in my life,” he said.

Hughes was one of several who spoke from the stage of the Paramount to an audience of about 300 at STAND-UP, an acronym for Standing Together Accepting No Division United for a Purpose.

The community-wide meeting was the brainchild of Ashland-based evangelist Rick Skeens, who started in November to bring about the event.

“I just did a lot of prayer, prayed about it and asked the Lord about what we could do to come together to unify the body, the community of the area,” Skeens said in an earlier interview. “I had seen some things some other communities had done.”

One was a march against the growing drug problem that concerned churches and residents did in Grayson, Ky. But Skeens wanted to take a different approach.

“I wanted people where they could give their testimony and bring the community together in more of a stage setting,” he said.

That is how Skeens and his committee were led to the Paramount.

“What we have been praying for mostly is to bring a spirit of awareness on the churches that this problem is going on and it can be helped,” he said. “We want to help addicts and families of addicts. Mostly we want to bring the community together and bring the churches involved in this process of getting them help.”

Speaking at the Paramount, Skeens likened the drug problem in this country to the plagues of Biblical times and that conquering it can come when denominations forget their differences and join together in the fight.

“It is when a community bands together that things happen,” he told the crowd. “No longer will we let a whole generation stand victim to drug addiction.”

He also preached against isolating the drug addict like a modern-day leper.

“We as Christians have a divine commandment to love our neighbor,” he said. “That no matter what our brothers and sisters are suffering from to love them.”

Pastor Darrell Ford is the leader of Trinity Assembly of God in Coal Grove and had thrown his support to this mission of Skeens.

“I think it is a tremendous thing to do,” he said. “There is such a great need for this kind of service in our community. There is such a drastic drug and alcohol addiction problem in our area. There is a need for a coordinated effort where all pastors can send the churches to a place where they can go for help and direct their people to.”

In 2009, the Ohio Department of Health reported 1,371 deaths from drug overdoses, which translates to four people dying each day from overdoses. That figure is an increase of 320 percent over the past 10 years, according to the health department. In 1999 drug overdose deaths were only 327.

In 2007, drug overdose deaths became the leading cause of injury death in the state, higher than car crashes and suicide. That trend has continued.

Skeens would like to see an increase in rehabilitation facilities locally including non-residential treatment programs in area churches.

“It is our duty, our job, our calling to help the ones who are sick and hurting in the community, no matter what the illness or the hurting,” he said. “I would really ideally like to bring the secular and Christian treatment together united as one force … if we could get that accomplished, we would be doing really well.”

New agency can start billing patients who have that coverage More revenue should be coming in soon to the new... read more