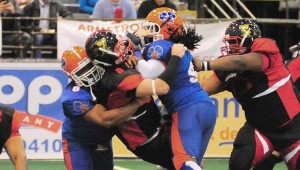 That concept wasn’t the mindset of the Huntington Hammer defense.

The Hammer returned five turnovers for touchdowns to upset the UIFL favorite Canton Cougars 41-26 Sunday in their inaugural game before approximately 2,000 fans.

Defensive back Kevin Allen Jr. was the main force in the defensive performance. Allen return all three of his interceptions for touchdowns and the Hammer also ran back two fumbles for scores.

“I just happened to be in the right place,” said Allen. “Our offense struggled. Our defense just picked it up. Our defense played immaculate all day. Once our offense gets going, I don’t know where we can go.”

The Hammer offense managed only a meager 79 total yards, 59 through the air as quarterbacks Matevious Young and Fred Ray were a combined 7 of 27 with five interceptions.

Unfortunately the Cougars have five turnovers of their own. Quarterback Brian Kover was 13 of 31 with three interceptions and lost two fumbles under a heavy Hammer rush all afternoon.

“This was a defensive game,” said Resignalo. “We did a good job putting this defense together. If our defense plays like that all season, we’re going to be something.”

The Cougars got the ball back late in the quarter but quarterback Brian Kover was hit while throwing the ball and the wobbly pass was picked off at the 7-yard line by Allen who returned it for his first score.

Canton drove to the Hammer 12, but Allen came up with the big play again as he returned an interception 40 yards and the lead was 13-3.

The rest of the half belonged to the Cougars who got a 6-yard scoring run by Adrian Burt and an 18-yard Kover to Tim Smith touchdown pass that put them up 16-13 at the half.

The second touchdown was aided by a roughing the kicker first down on a missed field goal attempt.

Ray — who took over at quarterback in the first half for Young — guided the Hammer on a scoring drive to begin the second half. Ray hit two of his three attempts in the drive including a 10-yard strike to Kenny Davis and the Hammer was back on top at 20-16.

“Obviously the offense needs some work. We’ll get it worked out this week. We relied on our defense and they took us to victory.

That was the end of the offense’s contributions for the game forcing the defense to step forward and take charge.

Canton answered quickly with a 48-yard field goal by Burkholder to get within a point.

Matt Speed turned in a big defensive play for the Cougars by intercepting a pass at the 2-yard line and running it back to the Hammer 1-yard line when Kover scored on third down for a 26-20 lead.

That was the end of Canton’s everything.

Huntington had a 32-yard drive to the Cougars’ 8 but Ray suffered his fourth interception. Speed ran his second pick back to his own 10.

On the first play, Allen intercepted his third pass and ran it back 12 yards for the score. Shemill’s kick gave the Hammer the lead for good with 3:41 to play.

Canton’s next series resulted in more offensive woes. Kover was hit by Rodney Fritz and Andre Portis scooped up the loose ball and ran 6 yards for the touchdown with one minute left.

A bad snap rolled on the turf and Fritz came up with the ball that he returned 15 yards for the score with 33 seconds to go.

The Associated Press WEST LAFAYETTE, Ind. — E’Twaun Moore seemingly toyed with Ohio State. Whether he was knocking down one... read more