Among the best and brightest 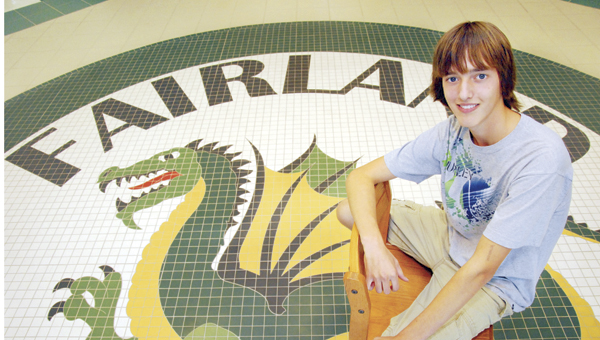 As a finalist for the elite scholarship, Robert Hinshaw and others from across the country were narrowed down from a group of about 16,000 semi-finalists. The Tribune/Jessica St. James

One of Fairland High School’s brightest seniors has advanced one step further in the competition for a National Merit Scholarship.

As a finalist for the elite scholarship, Robert Hinshaw and others from across the country were narrowed down from a group of about 16,000 semi-finalists.

Hinshaw began the process by submitting his PSAT scores from his junior year, which was a 215, putting him in the 99th percentile.

During his semi-finalist period, he submitted an application that showed his continued achievement throughout his senior year. In March, he will find out if he was selected to receive the award.

It is an award that Fairland librarian and media specialist, Evelyn Capper, said Hinshaw deserves. Capper said she has known Hinshaw since he was in the seventh grade.

“He’s a very kind young man. He’s extremely bright,” Capper said. “He doesn’t seem to think he’s better than anyone else. He gets along with a lot of people; he has a lot of different friends.”

And Hinshaw isn’t taking his senior year lying down. The senior runs track and cross county, plays alto saxophone in the band, led the school’s pep band, is a member of the Quiz Bowl team, takes AP classes and still finds time to hang out with his friends.

“He can just juggle everything,” Capper said. “His family is so supportive.”

Hinshaw is also a member of the American Junior Academy of Science, which is a branch of the American Association for the Advancement of Science. Competing in science fairs at the state level opened the door for Hinshaw to become a member and he is now a lifetime member and can attend their annual meetings.

“It’s a great portal for making connections with people,” Hinshaw said. “You go and meet professors at places like MIT and Harvard and the scientists who are doing top research and real cutting edge stuff.”

All Hinshaw’s work is beginning to pay off when it comes to college acceptance letters, also. He has already been accepted to Clemson and Auburn universities. He is awaiting decisions from Caltech, MIT, Stanford and his top choice, Duke University.

He said his parents are excited about his college goals and are encouraging him to attend wherever he wants.

Hinshaw said he would like to major in engineering. “I’m going to start out in engineering and see where I go from there,” he said “I wasn’t really sure what I wanted to do and I learned that engineering is a really good gateway major. You can go a lot of places with it.”

“Anyone of his teachers would say the same, or more even,” she said.

The 2010-11 Ironton High School Million Dollar Marching Band is hoping for a little community support after they were invited... read more