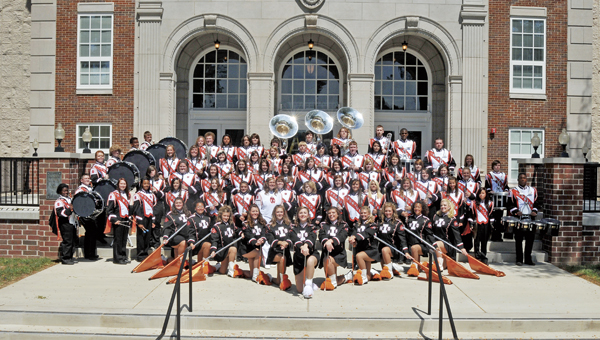 The 2010-11 Ironton High School Million Dollar Marching Band is hoping for a little community support after they were invited to play on the U.S.S. Intrepid in New York City. Submitted

As one of the highlights of Ironton High School football games, the Million Dollar Marching Band always helps in keeping the crowd pumped up during all four quarters.

Now, the band is asking the community for some support.

The marching band has been invited to play aboard the U.S.S. Intrepid in April and director Jeff Sanders said the trip might not be possible without a little extra help.

Sanders said the cost of the trip to New York City, where the aircraft carrier is now permanently docked, is about $48,000. So far the band has raised about $20,000 and Sanders projects that after all the fundraising between now and April, the group could still be short around $10,000.

The students will be performing at an event to honor veterans and the armed forces.

“The students have been fundraising like crazy,” Sanders said. “Just between now and when we leave for the trip, we’re going to be selling cookie dough, California strawberries and flower bulbs.”

Sanders also said they were looking at putting on a talent show or battle of the bands to raise funds.

“I’m open to suggestions,” he said.

The trip to New York is something Sanders said the band usually does every two years, but missed out on last year. He said it is a salute to the students for all their hard work.

Besides the performance on the U.S.S. Intrepid, the students will get to enjoy a Broadway play, visit the Guggenheim Museum and the Museum of Natural History, see a taping of The Today Show, visit the Statue of Liberty and Rockefeller Center.

“With any trip, our primary goal is to showcase our students and promote Ironton and the state of Ohio,” Sanders said. “That’s always number one. It also serves as a reward for all the juniors and seniors for their, usually, six years in band, or more.”

Sanders also said community businesses are welcomed to sponsor the band in any way.

“Ironton businesses have always strongly supported us,” he said. “I have no expectations for amounts. Any amount would be helpful and greatly appreciated. It’s all about the kids and the school. We’d appreciate any support.”

To contact Sanders about donating or fundraising, call Ironton High School at 532-3911 or email him at Jeff.sanders@tigertown.com.

A Huntington man is in the Lawrence County Jail today following a police chase that ended in Chesapeake Monday. Michael... read more