Students get lessons from STAR residents 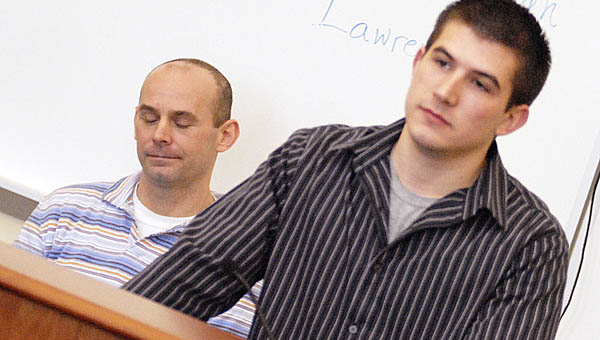 Twenty-three-year-old Shane Bays talks to students at Ironton High School Wednesday morning about his life experiences with drugs. Bays along with Danny Cox, seen in the background, are both residents of the STAR Community Justice Center.

By Billy Bruce • For The Tribune

In 1989, Danny Cox was a hero in Ironton after catching a touchdown pass to help the Fighting Tigers win the state championship over Campbell Memorial, 12-7. It was the second and most recent state football championship in Ironton High School history.

In 2009, he was a goat in the city after catching three felonies when busted in a high profile drug trafficking ring The Tribune headlined as The Dirty Dozen.

Wednesday, Cox and 23-year-old West Portsmouth native Shane Bays, both residents at STAR Community Justice Center, visited Cox’s alma mater to talk to students about the dire consequences drugs have meted out on their lives.

Each took a different yet similar path to STAR, a minimum security community-based correctional facility in Franklin Furnace that aims to alter the thinking that produces criminal behavior.

Cox claimed that he didn’t drink alcohol or do drugs in high school. He avoided the partiers until falling in love with marijuana in college. That led to complacency, which led to pain pills, which led to near destruction. Bays, also an athlete and member of the 2002 Senators state championship runner-up football team, began drinking as a freshman. Soon afterward, he also found pain pills.

“I hung out with the wrong people and started doing pills just to impress them,” Bays said. “I had a great childhood and a great family. I knew what I was doing was wrong, but before long it was too late. I was addicted.”

He began stealing from his family and others while also concocting schemes within his community to support his expensive habit.

After four trips through rehab and nine detoxifications, he finally went over the edge and committed a felony that landed him in prison for three years.

Cox became enamored with the business side of illegal prescription drugs, as well as the high. He made multiple trips to Florida “pill mills” to obtain drugs to feed his habit and also satisfy local demand by selling them to users in Lawrence County.

A former youth pastor, Cox noted that he knew each day that he was doing the wrong thing.

“But you can’t break that cycle on your own,” he noted, urging any of the students who might currently be using drugs to immediately seek help, while also detailing the powerful physical effects of withdrawal.

“You don’t want to turn out like me,” he said, candidly. “No matter how strong you are or how much willpower you think you have, this could happen to you. Do yourself a huge favor and never start using drugs.”

Both men spoke of their experiences in prison, mentioning the rapes and beatings they witnessed (Cox described watching a murder take place), along with pressure from gangs to either join them or face their wrath.

Both expressed that a prisoner is just a “number” who must figure out for him or herself the best way to survive while incarcerated. Crimes committed within prison walls aren’t reported because prisoners are terrified of assuming the detrimental label of “snitch.”

“I got my head busted in by some ABs (Aryan Brotherhood gang members) because I wouldn’t join their gang,” Cox noted. “I didn’t know my name for three days, but I couldn’t say anything because I was afraid I would get a ticket (sanction) and have to spend more time in prison.”

Cox became emotional when talking about neglecting his children’s needs to feed his addiction. Bays lamented coercing a female friend who had never used drugs to try the powerful pain killer Oxycontin.

She became obsessed with the drug, lost her job, home and car and was eventually incarcerated. According to Bays, she still uses to this day.

Cox told the story of an inmate friend who, upon drinking for the very first time on prom night, wrecked his car and killed all three of the friends in his vehicle. That man is currently serving his eleventh year in prison for that one decision.

When Cox asked Adam Webb, a current IHS football player, if he would like to have a state championship ring, the young man nodded as if to say, “Of course!” Cox then pointed to an empty ring finger on his right hand. “Do you know where mine is? It’s about two blocks away on Sixth Street. I sold it to a drug dealer for one pill because I was sick.”

Ironton City Schools Superintendent Dean Nance, obviously affected by the candor of both men, thought the message brought forth by the STAR residents was much more impressive than a state championship in any sport.

Addressing Cox and Bays while holding his forefinger about 1/8 inch from his thumb, he stated, “Listening to you speak has definitely changed me because I know the difference between you and the rest of us is this much.

“If we reach one kid today it will be worth it.”

Cox humbly volunteered to address the children in Ironton, where he has been recognized as both a hero and a villain, in hopes of reaching at least one kid. His renewed faith in Jesus was a requisite theme throughout his talks with the students. His favorite Biblical passages from Matthew 7, verses 13 and 14, are tattooed on his left arm.

“If I keep Jesus first and use my life to help others, nothing else matters,” he said.

WNF ceremony planned for May 12 The Wayne National Forest began as just 43 acres of land in Lawrence County... read more