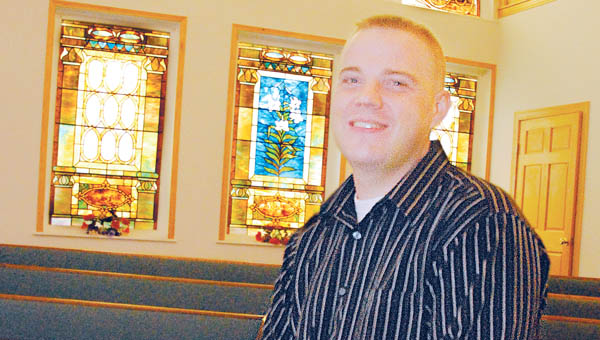 Matt O’Bryant, is the newest pastor at the Calvary Baptist Church located on the corner of South Fifth and Quincy streets.

From the first time Matt O’Bryant stepped into the pulpit at Ironton’s Calvary Baptist Church, he knew there was something special about the church.

The 33-year-old pastor was filling in that Sunday as the church searched for a full-time preacher. He recalled a conversation he had with his wife following the service. He asked her what she thought of the church.

“My wife said, ‘I felt really comfortable,’” O’Bryant said. “And it went from there.”

Now, after three months, a lot of discussion and prayer, O’Bryant is the congregation’s new pastor.

“These people are great,” he said. “They’ve made us feel right at home from day one.”

An Ironton native, O’Bryant preached his first sermon at the age of 15, soon after feeling God’s call on his life.

“There was a time when I ran from it and hid,” he said of his calling into the ministry. “But the Lord always has a way of finding you.”

It could be said that preaching is in O’Bryant’s blood. His father is a preacher and former pastor at Sharon Baptist Church. One of his brothers is a deacon; another is also a pastor.

“Our lives have been centered around church for as long as I can remember,” O’Bryant said.

After seeing what his father went through while serving as a pastor, O’Bryant used to say he’d never go into the ministry.

Now, after living out his calling for the past 18 years of his life, O’Bryant says the best part of the job is the people.

“Just the fellowship and the love we have for one another,” he said.

O’Bryant was 8 when the family left Ironton for Meigs County, where his father took another church. After high school, though, he moved back to Ironton to study teaching at Ohio University Southern.

It was there that he met his wife, Leigh Ann, who is also a teacher. Besides his work at the church, O’Bryant is a teacher for Virtual Community School of Ohio. As such, he provides educational services for students at Mended Reeds and the Necco Center.

In his new role, O’Bryant wants to focus on his congregation’s spiritual growth and adding to the church’s population. The church currently averages about 25 people each week. Besides their two small children, O’Bryant and his wife are the youngest in the congregation by about 30 years, he said.

“We need to build up a youth program and a young adult program,” he said. “These are some things we need to target.”

Toward the goal of attracting younger people, the pastor is growing the church’s presence on the Internet with a website and a profile on Facebook.

“(It’s been good) so far. It’s only been up a week,” O’Bryant said of the Facebook page. “There’s something new everyday from the church on there.”

While O’Bryant is enjoying his work at the church, Deacon Jim Kelley said the church’s feelings are mutual.

“He’s what God ordered and I’m thrilled,” Kelley said. “We’ve been praying for two and a half years for a preacher.”

ASHLAND, Ky. ­— Jerry Mansbach and the Mansbach Foundation, presented the Paramount Arts Center with a $10,000 donation for new... read more