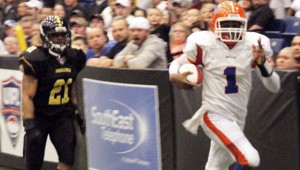 Huntington Hammer quarterback Martevious Young (1) races to the end zone as he scores against the Eastern Kentucky Drillers in Friday’s game. The Hammer suffered their first loss, 38-26. (Photo Courtesy of Daniel Fisher of the Huntington Hammer)

PIKEVILLE, Ky. — The Eastern Kentucky Drillers welcome all free gifts, especially if they include a win.

The Drillers took advantage of four straight turnovers to rally past the Huntington Hammer 38-26 Friday before 3,600 fans in a UIFL game.

“We had a lot of turnovers,” said Hammer coach Josh Resignalo whose team held an opponent under 40 points for the second straight game.

“We need to be able to put a whole game together on offense and defense. If we learn to do that we’ll be a complete team.”

The Drillers converted quickly after a missed field goal by the Hammer to start the game.

Allan Holland hit Aric Evans with a 21-yard touchdown pass on the Drillers’ first play for a 7-0 lead. Kicker Brandon Miller made a rouge kick on the kickoff and it was now 8-0.

The Hammer had the ball at the 5-yard line and quarterback Martevious Young was sacked in the end zone for a safety and it was 10-0.

Two plays later, the Drillers scored again on a 39-yard strike from Holland to Evans and it was 17-0 six minutes into the game.

The Hammer defense took over in the second quarter and shut down the Drillers’ offense with a stop on fourth down.

Kenny Davis — who picked three passes in the first game — intercepted a Drillers’ pass to set up a 2-yad scoring plunge by Young with just 27 seconds on the clock and the Hammer trailed 24-20 at the break.

“We felt we had the momentum at the end of the first half. We started to feel pretty confident at the half,” said Resignalo.

The Hammer forced a missed field goal and then Young scrambled 40 yards for a touchdown to give his team a 26-24 lead.

But the Drillers came right to regain the lead on a five-play drive capped by Barbour’s 12-yard scoring reception as the ball ricocheted off the wall for a 31-26 lead.

Huntington drove down to midfield and Young threw a long pass on the run into the end zone but the Drillers’ Jason Conner picked off the toss and ran it back 55 yards for the clinching touchdown.

The Hammer is off this week before traveling to Saginaw, MI., at 4 p.m. on Sunday, March 13.

“We’ll get it together going into the bye week. It’s huge for us. We’ll get guys healthy. We’ve got guys who are dinged up,” said Resignalo.