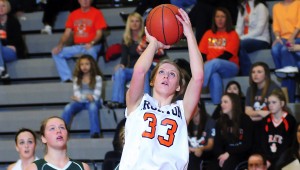 ATHENS — Welcome to the Ohio University Convocation Center. Sit and stay a spell.

Five area teams will make for a long weekend as they play in the district tournament at the Convo Saturday and Sunday.

Date and time chan ges have been in effect due to the uncertain status of Ohio University hosting a MAC tournament game. The Bobcats will play at home on Tuesday, thus forcing some changes in the schedule.

The Lady Pointers are favored to advance to the regional and look to avoid the upset as they attempt to stop Marietta’s tandem of 5-foot-9 sophomore Erica Dawson and 5-9 seniro Maegan Grosel.

After the Div. II championship, the Division III title game between the Ironton Lady Fighting Tigers and Eastern Brown Lady Warriors will tip off at 1 p.m.

Ironton must crack the pressure-style of the Warriors who are led by 6-foot senior Cristina Burns who averages 11.2 points a game and 5-3 senior point guard Shayla Black averaging 10.7 points a contest.

The Convo will be cleared and then the two boys’ Division III district semifinal games originally scheduled for Monday will be played.

The Fairland Dragons face the Eastern Brown Warriors at 7:30 p.m. followed by Portsmouth and Northwest at 9:15.

Fairland’s key target is the Warriors 6-foot junior Jordan Payne who has a 14.0 scoring average.

At 3:45 p.m. the Ironton Fighting Tigers face the second seed out of Athens in the Meigs Marauders who rely on 6-3 senior Cameron Bolin with 16 points per outing.

Top-seeded Chesapeake hits the court at 5:30 p.m. as the Panthers meet the Wellston Golden Rockets led by Nigel Courts, a 6-3 junior averaging 15 points a game.

Wrapping up the weekend is the Piketon vs. Alexander game at 7:15.

The South Point-Marietta winners advances to the regional tournament at a site to be determined on Tuesday. The Ironton-Eastern Brown winner returns to the Convo on Wednesday.

The boys teams are back at the Convo on Saturday, March 12 with the district finals scheduled for 5, 7 and 9 p.m. Winners advance to the regional tournament at the Convo.