One penny at a time 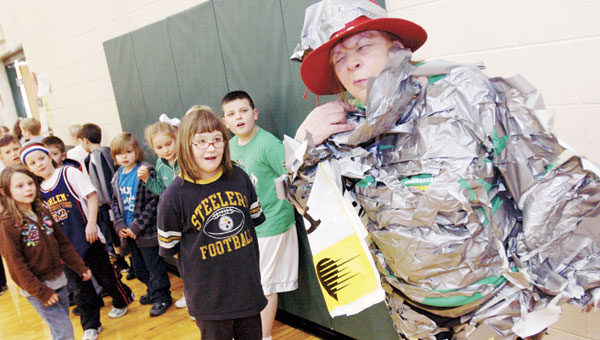 Principal Margaret Keeney may be getting a little worried during a duct tapping assembly at Fairland East Elementary Thursday.

It’s having fun for a good cause. That was the purpose behind the recent Pennies for Patients campaign at Fairland East Elementary School.

All money raised is going to the American Leukemia Foundation.

On Thursday was Stuck for a Buck, where students brought in money to buy a piece of duct tape, which they then used to tape principal Margaret Keeney to a wall. On Friday custodian Barbara Childers was in the hot seat.

“The kids bring in money and the classroom that collected the most money got to throw water balloons, (at Childers,)” Keeney said. “Also each grade level was building a penny wall with paper pennies to see who has the biggest wall.”

One day last week the children got to decorate their teachers with silly string and put shaving cream on the custodian. 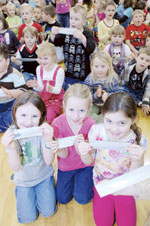 It was Childers who was the inspiration for the event.

“We did this a couple of years ago,” Keeney said. “Our custodian’s husband died last year with leukemia and she wanted to do it this year.”