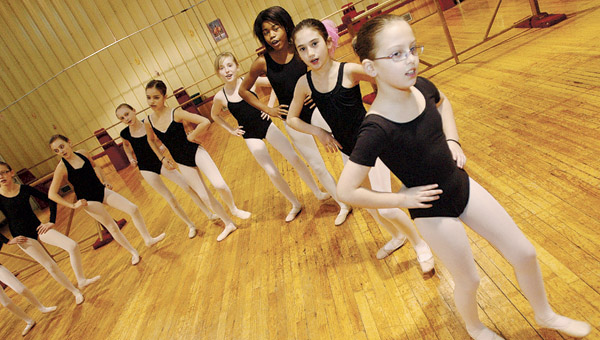 Maddie Heighton, far right, of Ironton is seen during practice at the Ashland Regional Dance Theatre for the upcoming production of “The Wizard of Oz” that will be performed at the Paramount Arts Center.

It may be true that there’s no place like home. But ask Maddie Heighton and Allyson Woods and they would probably tell you that the stage at a sold-out show can’t be topped either.

That’s what both St. Lawrence Elementary School students have to look forward to this week when they perform in “The Wizard of Oz” Thursday at the Paramount Arts Center in Ashland, Ky.

“I’ve seen it lots of times,” Allyson, 10, said of the movie. “I’m pretty excited because I’ve never done anything like a musical before. I’ve only done ballet.”

Maddie, 9, said she watches the film every Halloween. “(I’m looking forward to) probably seeing everyone, the cast members,” she said.

Both girls say they have been dancing since they were 3 years old. 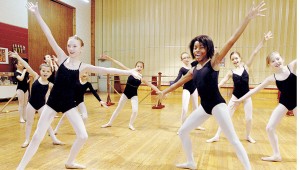 Bailey Gilliam, left, and Kaylee Robinson, right, are seen during practice as they play the part of Munchkins in the upcoming production of “The Wizard of Oz” at the Paramount Arts Center.

Maddie and Allyson are two of 12 girls ages 8 through 13 picked to represent the Ashland Regional Dance Theatre and the Ashland Youth Ballet in the production. All 12 of the girls, who are from Kentucky, Ohio and West Virginia, also danced in the “Great Russian Nutcracker” in December.

“They’ve had two opportunities to dance with professionals this year,” Maria Whaley, instructor and director of the youth ballet, said. “When you’re 8 years old, that’s a pretty big deal.”

To prepare for their roles as Munchkins in Act I and Winkies (soldiers of the Wicked Witch) in Act II, the dancers have been practicing since January.

“We started mid January getting organized,” Whaley said. “The material asked you to rehearse four weeks prior. We extended it out just a little bit so it wasn’t so intense.”

The practices have been two to three hours, twice a week. The girls have learned singing and acting parts as well.

Whaley said their experience in “The Nutcracker” helped prepare them for this production.

She admitted she was at first a little nervous for the girls. Though the choreography may not be difficult, the touring company demands a high level of quality. It’s often beyond what children are used to, Whaley said.

“Then they came in the other night and the energy level was up and they were bright-eyed,” she said. “They were awesome.”

The dancers will have their final rehearsal at the dance theater Wednesday. They’ll practice for the first time with the touring company Thursday afternoon for the 7 p.m. show.

Molly Gumbert, a Raceland High School student and member of the Ashland Youth Ballet senior company, will be backstage with the girls during the production. She said the girls, who were picked for their abilities, are doing even better than expected.

Cookbook serves up generations of love

COAL GROVE — If the quickest way to someone’s heart is through their stomach, then the late Betty Jane Thompson... read more