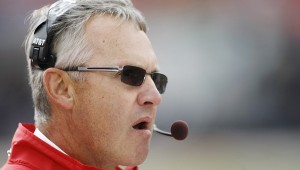 Yahoo! Sports is reporting Ohio State football coach Jim Tressel was informed that some of his players had sold memorabilia to the owner of a tattoo parlor more than eight months before the school said it was made aware of improper transactions.

The website, citing an unidentified source, reports Tressel received information as early as April 2010 that players were selling items to Edward Rife, who owns Fine Line Ink Tattoos in Columbus

Ohio State athletic director Gene Smith has said the local U.S. Attorney’s office on Dec. 7 alerted the school that some of its players were selling items such as jerseys and championship rings to Rife.

Soon after, the school opened an investigation and informed the NCAA of the possible rules violations.

On Dec. 23, quarterback Terrelle Pryor was among five players suspended by the NCAA for the first five games of the 2011 season. All the players were allowed to play in Ohio State’s 31-26 victory against Arkansas in the Sugar Bowl.

If it is proven that Tressel knew about the possible NCAA violations and did not inform Smith or the compliance office, the coach and the program could face more sanctions.

Each player was also made to repay to charity the value of what he gained by swapping their memorabilia for cash and tattoos.

Ohio State is appealing to the NCAA to get the suspensions reduced, although the NCAA’s decision to allow the players to participate in the Sugar Bowl drew a wide range of criticism and questions.