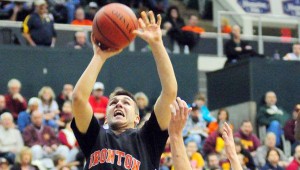 Ironton’s Travis Elliott drives past the Meigs defense for a layup in a 70-64 win. (The Ironton Tribune / Kent Sanborn of Southern Ohio Sports Photos)

ATHENS — Will three be the lucky number?

Of the six teams, three were ranked in the final Associated Press poll. Chesapeake was second behind Cincinnati Taft. Piketon finished sixth in the poll and Portsmouth climbed into the final rankings at No. 10.

Saturday’s winners advance to the regional semifinals on Wednesday, March 16, at Ohio University.

The Chesapeake-Piketon winner will play the winner of the Sugarcreek Garaway-St. Clairsville game at 6:15 p.m. The Ironton-Wheelersburg winner faces the Fairland-Portsmouth winner at 8 p.m. The regional championship is 7:30 p.m. Saturday, March 19.

The Panthers are the defending regional champions.

Ironton and Wheelersburg met in the regular season at Ironton with the Fighting Tigers winning 55-37. The Pirates were just 15 of 46 from the field.

“Obviously this game is being played under different circumstances, so you really have to discount the first game,” said Ironton coach Mark LaFon. “I think Wheelersburg had some guys under the weather the first time we played and they always play well in the tournament.”

Andy Stegman — the Pirates’ 6-foot-6 senior center — has just 12 points in the game. He is averaging 18.4 points a game and he poured in 31 points as the Pirates upset Peebles 63-58 in overtime last Saturday in the district semifinals.

The other key players for the Pirates are 6-2 senior Webb Ballard who averages 10.5 points a game and 5-11 senior point guard Brandon Schankweiler.

Ballard had 14 points in the win over Peebles.

Chesapeake will contend with the Red Streaks who are led by all-district first team point guard Evan Legg.

The 6-2 senior Legg is averaging 22.8 points a game. He is surrounded by a balanced lineup that includes 6-6 Keenan Bush, 6-4 Jacob Braniff, 6-1 Jamie Helton and 6-2 Craigen Moore.

Legg scored 20 points and Braniff 12 as the Red Streaks beat Alexander 59-54 in their district semifinal.

Fairland will try to find the right matchups against the taller Trojans who have 6-6 Dion McKinley and 6-5 Tre Underwood inside.

The Trojans are led by the trio of 5-11 senior guard Andrew Bendolph, 6-2 junior Wayne Evans and McKinley. Bendolph averaged 16.3 points in 10 games, Evans scored at a 13.8 clip and McKinley had 14.1 points a game.

Portsmouth survived a scare in the sectional finals with a 65-64 win over South Point. The Trojans then got past Northwest 59-42 in the district semifinals.

The Trojans’ big three did the bulk of the scoring against Northwest with Bendolph getting 22, Evans 19 and McKinley 14.

Buckeyes hoping to play their best

The Associated Press COLUMBUS — One of the strengths for No. 1 Ohio State all season has been the Buckeyes’... read more