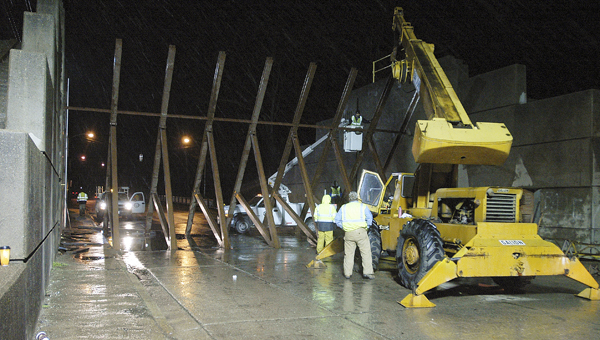 Workers for the City of Ironton spend Thursday evening erecting the floodgate along North Second Street.

“We will wait to take it down until it’s below the 48-foot mark,” Street Superintendent Mike Pemberton said. At approximately 8 a.m. today the Ohio River was around 49 feet, he said.

City workers started putting the gate up around 3:30 p.m. Thursday and finished around midnight, Pemberton said.

“We want to emphasize safety while crossing that railroad,” Mayor Rich Blankenship said. “We will have an officer there. We urge extreme caution obviously for that crossing.”

“At that crossing, make sure (you) obey that officer,” Pemberton added. “Don’t try to beat that train.”

While the gate is up, part of the city’s fire department will be stationed at the elementary/middle school on Delaware Street, so the department will have quick access to north Ironton in the event of a fire, Blankenship said.

City officials have been working closely with school officials, the mayor said.

“It’s my understanding that they will close school while the gates are up,” Blankenship said.

Superintendent Dean Nance confirmed that all schools in the district will be closed while the gate is up during this instance. In the future if it appears the gate will be closed for an extended period of time other arrangements may be made, Nance said.

Pemberton said the Ohio River is expected to crest at 52 feet Sunday or Monday. Flood stage is 50 feet, he said.

“Hopefully we can take it down Monday so that they can have school Tuesday,” Pemberton said.