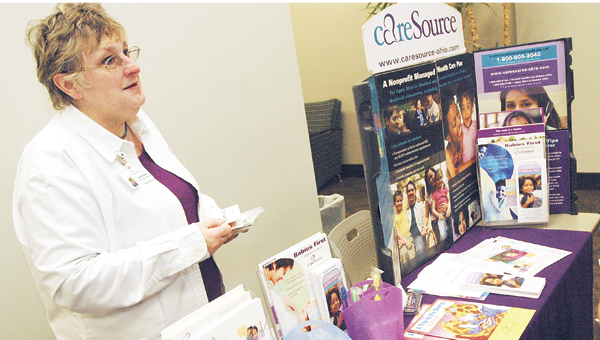 Around 20 services and businesses were represented at the second annual Women’s Resource Fair at Ohio University Southern Proctorville Center Thursday.

From 11 a.m. until 3 p.m., people were given information about a variety of issues, from women’s health to childcare and job training. Sarah Kyllo, student services specialist, said the interest in last year’s event led to this being a yearly fair.

Kyllo said the fair is helpful to the community.

“A lot of people don’t realize the resources that are available to them and what support they can get from the community,” she said.

Lawrence County Early Childhood Academy was represented by Michelle Thompson, a family advocate. She was sharing the services offered for families in preschool, daycare and prenatal care, to name a few. She said there are a lot of people who know about their services, but there are always some who don’t.

“Fairs like this are a good way for people to come in and see what’s available,” Thompson said.

Ferrell said the people who use them most are between jobs or have never before been employed. Some are college students and some are senior citizens who don’t have computers of their own at home to put their resumes together or other job-related tasks.

Amber Cardenas and Casey Copeland are doulas who wanted to educate women about what they can do for women during pregnancy and childbirth.

Copeland said a doula is a new name for an old job, labor coach.

“We’re hoping to get more awareness out there and let women know what their options are,” Cardenas said.

Other organizations, like Contact Rape Crisis Center, Branches Domestic Violence Center and Tri-State Homeschoolers were there too.

Michelle Thacker, 36, of Scottown, and Melissa Doss, 24, of Proctorville, are students of the ABLE program at OUS Proctorville Center, studying to get their GEDs. They were both pleased with how much information they learned at the fair.

“We learned that there are a lot more resources than we knew of,” Thacker said. “That is good.”

While the event was called the Women’s Resource Fair, women weren’t the only ones stopping by and learning.

Jeff Thacker, 23, and Joey Pence, 21, both of South Point and in the ABLE program, said they learned a lot from attending.

Thacker said the Lawrence County Health Department’s information on a program to stop smoking was something he found very helpful.

“I thought this place was only for women, but I guess not,” Thacker said.

Thacker and Pence both found the Workforce Development Resource Center information helpful. Pence said he learned some information about assistance with going to college and finding work.

“I want to give my kid a better life than I had,” said Pence, father of an 18-month-old.

On Monday the Southern Ohio Port Authority, SOPA, will sign a purchase agreement with Infra-Metals to construct and operate a... read more