Reflecting on the Iron Furnace Era

The Hanging Rock Iron Region encompassed six counties in Ohio and four counties in Kentucky. Union Furnace was the first to be built in Lawrence County, Ohio, in 1826. With its building, a period of growth, wealth and prominence began.

Each furnace employed a variety of workers. One such worker was William L. Myers. Myers was born in Ironton on August 4, 1899, to Frank and Sarah Myers. In 1914, at the tender age of 15, he began his career as a furnace worker. He stood 6 foot tall and was known to chew pouch tobacco.

The furnace consisted of furnace stack, four hot blast stoves, five batteries of boilers, cage tower-trestles, where ore, coke, and limestone was unloaded for filling the furnace; an engine for generating electricity to supply light for the plant workers; two river pumps for water supply and pumps to feed the boilers with water.

The work was all done by hand and each man worked 12 hours per day. When they cast, the iron was run in pig beds which were molded in sand. There were three men who molded pig beds, better known as helpers first, second, and third.

The stock was brought in from under trestles in two-wheeled buggies pulled by men.

There were also three ore helpers, one cager, two top fillers and coke snapper. The cager put buggies on cages where two top fillers hoisted it and dumped it onto a big bell and when full charge was put on, it was lowered into the furnace. The coke snapper was supposed to keep coke raked up.

At the cast house, there was one keeper and one stove tender. The engine room consisted for one engineer, one oiler and one fireman of boilers. After cast was run in sand, there was four iron carriers who, when iron cooled, broke it.

Then they carried it, put it on trucks, then pulled by horses up on the hill where it was loaded into cars and most of it was shipped to the old Ashland Steel Plant, which is now dismantled.

The name of the company was the Kelly Nail and Iron Co. This plant was wrecked for junk a few years ago. They also had a nail mill, where I started as a gin hand. I learned to tend the stove there, and during (World War I) I was tending stoves. I worked 12 hours per day and highest wages for tending stoves during the war was $5.88 per 12-hour day.

Later, I also worked at Bellefonte Steel and Wire Co., but not until they had to put a skip hoist. They were still running iron into sand, though later they put in a pig machine.

I was a helper there. This furnace consisted of a stack, skip, hoist, scale car, three hot blast stoves, down corner, gas washer, six batteries boilers, cast house, a crane for loading iron for shipping, several pumps, two river pumps, two upright blowing engines, one turbine blower and generator. It was built for capacity of about 250 tons and was a little more under cover for the men did not have to work much in rain and snow. 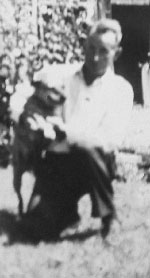 They had a big steel trestle with steel bin in which ore, stone and coke was unloaded, and down in under a scale car ran into which two men drew the ore and lime. The skip hoist operator drew the coke out of bins in to skip cars which was not weighed. Ore and stone were weighed in the scale car.

A charge on this furnace consisted of two loads ore, one load stone, and two skips of coke. It generally always took from 32 to 36 charges every eight hours. This furnace was also a hand furnace and worked 12 hours per day. I did not work there until after first World War. They remodeled it during the war and made it an up-to-date furnace. It was also connected with Ashland Steel Plant, as a good bit of their iron was shipped over there. They also operated a nail and wire mill here in town, then they put in a pig machine.

Before the pig machine was put in, the crew consisted of one keeper, four iron men, three men in the stock house, two men on trestle, one stove tender, one water tender, one boiler fireman, one boiler cleaner, one engineer, one oiler, one turn-foreman, and one crane operator.

After the pig machine was put in, the crew consisted of one keeper, one helper, one stove tender, three men on pig machine, two crane operators, two men stock house, two hill men, one steam crane operator and fireman, which used solely for filling bins with ore and stone.

The coke was unloaded out of cars into bins. I worked some here when they were working 12 hours per day. Also worked there after they started 8-hour shifts. This company went broke and later it was junked by American Rolling Mill (ARMCO).”

In 1938, Myers married his second wife, Emma Pennington. Emma’s daughter, Ruth E. King, became Myers step-daughter and often called him “Daddy Bill.” Ruth found his account of his furnace days and wanted to share them with the rest of Lawrence County.

On June 17, 1967, William Myers died at the Lawrence County General Hospital. He was buried at Woodland Cemetery.