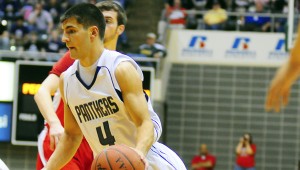 Chesapeake Panthers’ Nathan Copley (4) drives toward the foul line against the Piketon defense. The Panthers beat Piketon 68-52 to reach the Division III regional semifinals at 6:15 p.m. Wednesday at Ohio University against Sugarcreek Garaway in a rematch of last year. (The Ironton Tribune / Kent Sanborn of Southern Ohio Sports Photos)

The Panthers and Pirates are right back where they were a year ago as the two teams meet in the Division III Regional Semifinals for the second straight season.

Last year, Chesapeake beat Garaway 52-51. They two teams will face each other again at 6:15 p.m. Wednesday at the Ohio University Convocation Center.

The Panthers (21-1) return three starters from last year while the Pirates (20-3) have four starters back.

The game will match contrasting styles, but only to a point. The Panthers prefer to use their defense to pressure opponents and ignite their running game.

Garaway runs a disciplined offense that is looking for a high-percentage shot, but Panthers’ coach Ryan Davis said the Pirates aren’t one-dimensional.

“They try to get the looks they want, but they’ll run if they get the chance,” said Davis.

Garaway has a balanced offense other than Honigford who scores at a 16.6 clip and grabs 9.5 rebounds.

But the Pirates are known more for their defense than their offense.

“They’re quick and strong. They get up in you defensively. They’re a good defensive team,” said Davis.

The winner will advance to the regional championship game at 7:30 p.m. on Saturday. Wednesday’s second semifinal game has Wheelersburg playing Portsmouth at 8 p.m.