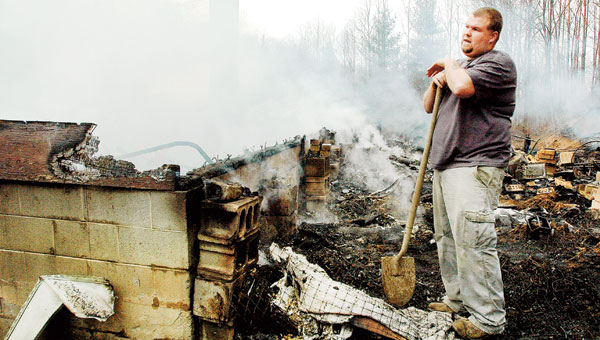 Jason Edwards picks through debris at a fire at the Pedro home of Charles and Shirley Stapleton Tuesday afternoon.

PEDRO — A Pedro family is struggling to pick up the pieces after a fire destroyed their home Tuesday afternoon.

Charles and Shirley Stapleton were not there when their home at the end of Township Road 343, also known as Stapleton Hollow, caught fire.

Sometime around noon, while Charles Stapleton, 77, was receiving his dialysis treatment, Jim Porter, Charles’ brother-in-law who lives next door, said he heard what sounded like two separate explosions and called 911.

“I was in the kitchen. It sounded like a muzzleloader went off,” Porter said. “Then I heard a rubbing sound. I don’t know what it was.”

Porter ran to the window to see what had made the sound.

“About that time I heard a great big explosion,” he said. “I ran and looked out the kitchen window and I saw the house on fire.”

Flames engulfed the entire house. By the time the fire department arrived, it was too late.

The house was a total loss. Several hours after, the fire still smoldered. The only thing left standing was the chimney, inscribed with “The Stapletons.” 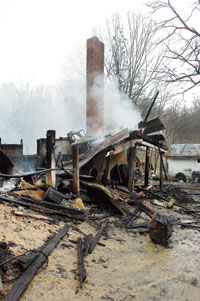 A protruding chimney bearing the Stapleton name is the only recognizable landmark that remains of the home of Charles and Shirley Stapleton following a fire Tuesday afternoon.

Everything was destroyed, including the family pets: dogs, birds, guinea pigs and even a deer.

Family members on the scene said one of the Stapleton’s granddaughters, Daisy, was asleep in the basement at the time of the fire. She ran back into the inferno to try and rescue some of the pets. Her ferrets, aptly named Shadrach, Meshach and Abednego, escaped the fiery furnace.

Daisy was taken to King’s Daughter’s Medical Center. She was treated and released for smoke inhalation.

James Stapleton, one of Charles and Shirley’s 14 children, said he was distraught, as were his parents.

“My dad built the house with his two hands while raising 14 kids,” he said. “It was a home to all of us. Mom would always still make big dinners for us all.”

James and one of his brothers broke the news of the fire to his father.

“We let him finish (dialysis) first. The last thing we wanted to do was tell him while he was on dialysis,” he said. “I pray to God we can get everything back the way it was before.”

With nothing but the clothes on their back, the Stapletons made arrangements to stay with one of their sons in the hollow. Having lived there for nearly 50 years, Charles refused to go anywhere else, the family said.

The cause of the fire is still under investigation. The family suspects that the fire began in the attic of the two-story home, and ignited Stapleton’s oxygen tanks as it spread through the house.

The State Fire Marshal was unable to confirm that at the time.

“We have no evidence right now that indicates anything exploded,” said Shane Cartmill, public information officer for the State Fire Marshal. “It could be attributed to oxygen tanks within the home, but again, we have no confirmation right now.”

State investigators will return to the house this week to continue the investigation.