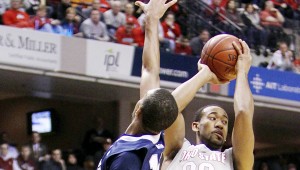 COLUMBUS — Top-ranked Ohio State will be staying close to home in the NCAA tournament.

The Buckeyes (33-2), who captured the Big Ten tournament title on Sunday to go with the regular-season title, are the No. 1 seed in the East Region — and also the overall No. 1 — and will play the Texas-San Antonio (19-13)-Alabama State (17-17) winner at Cleveland’s Quicken Loans Arena in a second-round game on Friday.

Playing in Cleveland is great news for starters David Lighty and Dallas Lauderdale, both Cleveland natives. But it could mean they run the risk of disappointing some old friends.

“When they announced it, I got a big smile on my face,” said Lighty, a fifth-year senior. Then he laughed as he added, “And instantly I got about 30 text messages from people wanting tickets.”

UTSA and Alabama State, both No. 16 seeds, meet in the inaugural First Four tournament at the University of Dayton on Wednesday.

The Buckeyes defeated Penn State 71-60 in the conference tournament finale in Indianapolis on Sunday.

After three games in three days — none of them a blowout — the Buckeyes’ competitive fires were still lit after the game.

“After the game if I told them we had to play another game, I think they’d do it tomorrow,” coach Thad Matta said of his team, which has won its last seven games. “There was no, like, ’Hoo, we did it!’ It was just sort of, like, ’What’s next?’ That’s what I love about this team.”

Playing in Ohio in an NCAA tournament hasn’t necessarily been good news of late for the Buckeyes. They have yet to survive the weekend, going 1-2, despite having their huge following on hand for the NCAA tournaments in 2006 and 2009.

“I wouldn’t say we’re nervous,” Lighty said. “We’re confident in how we’ve been playing lately. We’ll just get focused and ready on Tuesday and come out to get ready for this.”

Matta said it helped that the Buckeyes have played before on the home floor of the Cleveland Cavaliers. Ohio State beat Cleveland State 80-63 at the NBA arena during the 2007-08 season.

Joining Ohio State at the top of the brackets are Kansas, Pittsburgh and Duke.

But the East Regional is packed with traditional powers. The No. 2 seed is Atlantic Coast Conference regular-season champ North Carolina, the No. 3 seed Syracuse and No. 4 is Southeastern Conference champ Kentucky.

“There’s no easy path,” Buckeyes shooting guard Jon Diebler said. “To get to the Final Four, you’ve got to beat great teams. We’re looking forward to the challenges we have.”

If the Buckeyes win their second-round matchup with UTSA/Alabama State, they would play the winner of eighth-seeded George Mason (26-6) and ninth-seeded Villanova (21-11) on Sunday. Tipoff times will be announced later by the NCAA.

Should they move on from there, they would play at the Prudential Center in Newark, N.J.

“We’ve got a good alumni base out there as well,” Matta cracked.

Ohio State is 45-25 in NCAA play, and will be going to the big tournament for the fifth time in Matta’s seven seasons.

While much of America fills out bracket sheets in office pools this week — and the Buckeyes will likely be a popular pick — one of their key players has no inclination to join the fray.

“I stopped filling out brackets after my eighth-grade year,” said freshman center Jared Sullinger, selected as the Big Ten tournament’s most outstanding player after totaling 15 points and 11 rebounds in the victory on Sunday. “I was terrible at it. I always went for the upsets. For some reason they never happened.”

Now he’s hoping they don’t happen to his team.