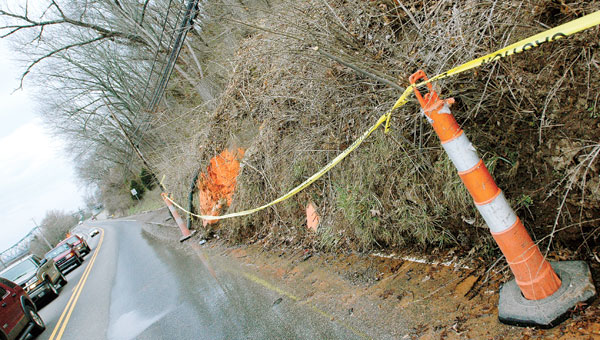 The hillside has covered the white line on State Route 7, or Rockwood Avenue, in Chesapeake Tuesday. Continued rainfall has made mud and debris slide off the side of the hill.

CHESAPEAKE — The somewhat drier weather has given relief to the hill slide slip that could potentially shut down part of Rockwood Avenue in the village.

But even without the drenching rains, the ground continues to encroach on the roadway.

“It is moving about an inch a day,” Chesapeake Mayor Dick Gilpin said. “It continues to creep.”

Late last week AEP removed a power line from the area on Rockwood, also known as State Route 7. The line had powered a street light there.

“The phone company has cut trees that were pressing against their line,” he said. “The trees were moving at the same rate as the hill. That has stopped any hazard from trees falling on the road.”

Frontier, which provides phone service to the village, is considering moving its line to the other side of the street, Gilpin said.

The slide started back in May and a month later began to affect the roadway.

Right now the hill slide is about six to seven inches passed the white shoulder line.

Since that segment of Rockwood is inside the village limits, its maintenance falls on the shoulders of the village. However, the village has turned to the Ohio Department of Transportation for assistance.

“They are painfully aware of what is going on,” Gilpin said about ODOT. The mayor hopes there can be a cooperative effort between ODOT and village.

“We will assist, but our resources are limited,” Gilpin said. “We don’t have the equipment to get in there.”

More than a week ago, an ODOT geotechnical engineer and crew from the traffic department began assessing the situation and possible solutions.

Gilpin is worried that the slip could force the closure of the road, or at the very least turn it into one-lane with a traffic light controlling the flow of cars.

“That is a major east-west corridor of the county,” the mayor said.

If ODOT determined the slip was an emergency situation, it could step in and administer the repair work contract for the city, according to Kathleen Fuller, spokeswoman for ODOT District 9.

“We do that for local communities,” she said. “It does work a little bit differently. We can’t go in and start doing the project. We have to be in touch with the local government. It is a state route, a primary artery. We want to work with our local community.”

Right now ODOT is conducting core drillings to determine the type of rock in the hillside and to check for stabilization, according to Fuller. An ODOT crew has also flown over the area.

“We are assessing the best course of action to repair the slip area,” she said. “We are looking at some kind of design with a retaining wall as a possibility.”

Fuller said ODOT is not at the point of letting an emergency contract.

“It is one of those things that will take a bit of time,” Fuller said. “Our geotech engineer will set plans in motion for whatever is best to secure the area. This situation is bad, but it is not as critical situation as the Coal Grove situation (on U.S. 52) where we knew that a rock was ready to fall. (The engineer) is working as quickly as he can to design the best possible project and how we are going to let the project. There is not a final decision.”

Kiwanis Club to host ‘Breakfast with the Easter Bunny’

IRONTON — On Saturday April 16 your child can receive a free picture of him or her with the Easter... read more