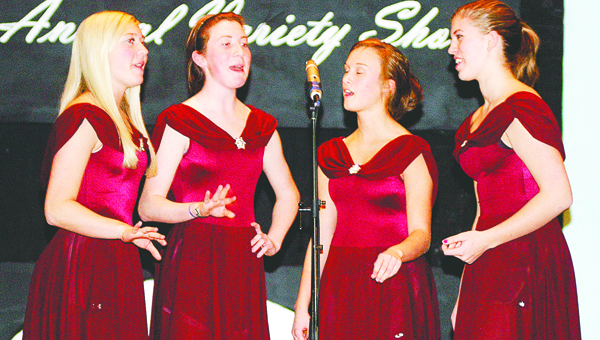 Haley Glockner, Glennie Hopkins, Maria Walters and Hannah Martin are the back up group to the song “Where Did Our Love Go” as part of the annual Variety Show performed by students from the St. Joseph High School.

A tradition of more than 30 years is continuing at St. Joseph High School this weekend.

The school’s annual Variety Show is slated for 8 p.m. Friday and Saturday.

“The Variety Show is a student-produced, student-written show and this is the 35th annual running show,” said Maria Whaley, a teacher who, along with teacher John Lutz, organizes the show. “In the early years of the school they had a similar show and then went away and was resurrected in the ‘70s.”

The theme this year is “More Hellos,” which comes from the Charles Schulz comic strip during which Charlie Brown exclaims that he doesn’t like goodbyes.

Nearly all of the students in the high school participate in some way with the show. Students sing, dance and act on stage. Others play music in the band or design the show’s backdrops.

“I think the best part of this whole show is that is a very much a community effort,” Whaley said. “It’s supported by not only teachers but a lot of the alumni and the students’ parents. There is so much labor-of-love effort that goes into the whole production.”

Sophomore Grant Geswein is performing in his second show this year. This year he’s a part of a song and two dances. He’s not nervous, he said. “I’m one of those people who can do something in front of anybody,” he said.

The students put in long hours preparing for the show. Whaley said they have been working for months on the concept of the show. In January they started to assemble the show and practice for it.

Levi Hopkins, a senior, will play the guitar and bass in the band.

“I get impressed with how it comes together at the very last minute,” he said. “It’s mostly written and performed by students. It’s just nice being about to see it go from being nothing to where it’s a show at the end.”

“Typically every seat is taken, especially for the dinner,” she said. “We’ve been having 200 make reservations for the dinner on Saturday. It’s quite a lot.”

Lutz said this year’s cast and crew has put together a strong show.

“I think musically it may be our best one and we hope the comedy is going to be good,” he said. “That’s something we never know until the audience is here.”

The Variety Show will be at 8 p.m. tonight and Saturday at St. Joseph High School. There will be a dinner at 6:30 p.m. before Saturday’s show. Tickets are $15 for dinner and the show and $5 for just the show. Dinner reservations must be made in advance by calling 532-0485.