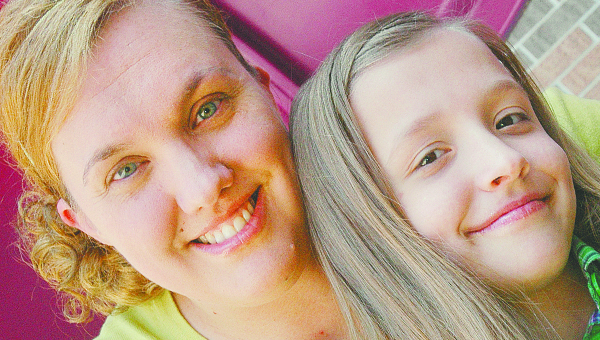 “My daughter has cystic fibrosis but cystic fibrosis does not have her,” Holley says of her daughter, Raegan Holley, 9. The pair is planning fundraising events to benefit cystic fibrosis research. On May 7, Jill’s Tumbling World will host a Zumba marathon and on May 13 there will be a walk inside the Chesapeake Elementary School for teachers and students. THE TRIBUNE/JESSICA ST JAMES

CHESAPEAKE — Raegan Holley is 9-years-old and almost comes up to her mother’s shoulders. She likes to do back flips in tumbling class, sing “Amazing Love” in front of her church on Sundays and play basketball with her kid brother, Grant.

Just the kind of things a 9-year-old likes to do. But she does something else most 9 year olds don’t have to do — sit and talk about what’s it’s like to have cystic fibrosis. It’s then that Raegan demonstrates an articulate poise and serene maturity that belie her young years.

It was around Thanksgiving when Raegan was 5-months-old that a persistent cough started to concern her parents, Dawn and Gabe.

First the Holleys were told to take a wait and see approach, but the cough didn’t go away. Then a regimen of cough syrup was added. That didn’t work.

“By the end of December, we still had no idea what was going on,” Dawn said. “Finally after several months I said what we are doing is not working. We need to have some tests run. She is very sick. She would have to sleep on my chest because she couldn’t breathe. She would gasp for breath. She had all that mucous in her lungs.”

A chest X-ray showed she had pre-pneumonia, which put Raegan in the hospital for a couple of days on a course of antibiotics. She got better and went home. But in February the symptoms started all over again.

Dawn called in another doctor who when he heard the baby’s case history said Raegan needed to be tested for cystic fibrosis.

“I didn’t know what cystic fibrosis was,” Dawn said. “I thought ‘Oh my gosh. Do you think she has a disease?’”

At five months the baby still weighed about nine pounds, about what she weighed at three months.

“She wasn’t growing,” Dawn said. “She was so pale and so little. She had these humungous hog jowl cheeks from the steroids she was on.”

A simple sweat chloride test came back with the diagnosis the Holleys never wanted to hear. Dawn had cystic fibrosis.

“We were absolutely devastated,” Dawn said. “By that time family members had printed out things off the Internet. You can get some accurate information, but you can get the bad and the good. Here was our baby girl, 5-months-old, and they thought she had this horrible disease.”

The next step was to consult with specialists at Children’s Hospital in Cincinnati.

But before that appointment came due, Dawn could see her baby was getting sicker.

“She started to get dehydrated. She had this horrible cough,” the mother recalled.

Dawn called one of her local physicians who told her to pack her bags and get to Cincinnati as quickly as possible.

“We left the next morning. I can remember being on the Double-A highway and the whole time Raegan just slept,” Dawn said. “She didn’t care about eating. She was basically dying in my arms. I was just numb. I couldn’t feel anything. Here was my baby. I can remember the outfit she had on, the shoes and her hair bow.”

Cystic fibrosis is a genetic disease that affects both male and female infants equally. It affects the lungs and digestive system. Currently about 30,000 children and adults in the U.S. have cystic fibrosis with about 70,000 cases worldwide.

Hongwei Yu, a professor of microbiology at the Marshall University School of Medicine, has studied cystic fibrosis since 1994.

“When you have the bad gene, the sodium chloride transport system will be affected,” Yu said. “Salt maintains the homeostasis of the lung. We all have mucous in the lungs but this is dehydrated mucous. It makes it thicker and difficult to remove.”

“We can fix that,” Yu said. “The nutrition part we can use supplemental enzymes.”

The Holley family stayed in Cincinnati for three weeks where Dawn and Gabe learned how to give their baby breathing treatments to thin out the mucous and make sure she got special enzymes before every meal so her body would get the nutrition it needed. Soon the young parents saw a transformation in their child.

“Two days after she was on the medication, she could lay on her belly and raise her head,” Dawn said. “Raegan had never smiled, never laid on her stomach and held her head up. That is all she would do. We called her turtle. She just wanted to look around. She was smiling.”

Fast forward about eight and a half years and Raegan today is a fourth grader at Chesapeake Elementary with a healthy acceptance of a disease most people know little about. At least twice a day and sometimes as often as five times, she puts on an air compressor vest to endure a breathing treatment where medication is pushed into her lungs to stop mucous buildup. Then the vest vibrates her chest to break up any buildup.

“It takes a little while,” Raegan said. “You sit there and get through them. But I’d like to be out playing.”

Raegan was about 5 years old when she understood she had cystic fibrosis. That’s when her mother explained how important her daily breathing treatments are.

“Most times it doesn’t bother me,” she said about her diagnosis. “I feel like everybody else.”

Now mother and daughter are teaming up to wipe out the disease that has so affected them both. Raegan’s mission will take a little while. She wants to become a doctor.

“I would like to help kids in need,” she said.

Dawn’s game plan is more immediate. She is planning two fundraisers in May, with all the proceeds going to cystic fibrosis research.

On Saturday, May 7, at Jill’s Tumbling World will be a Zumba marathon with instructors of the Latin music fitness routine putting participants through their paces for $5 donations.

Then on Friday, May 13, will be a walk inside Chesapeake Elementary for teachers and students.

For a brief time her daughter’s disease caused a sudden but momentary crisis of faith for Dawn.

“I had served God all my life. How could this happen to us,” Dawn said. “I really questioned God. My faith was so low. Our pastor prayed with us and something in me changed. God gave me the strength that any doubt would be erased. I knew God had Raegan in the center of his hands. Now most people don’t realize she has cystic fibrosis. She is very rarely put in the hospital. She is really doing great.”

PEDRO — A fire that destroyed a home in Pedro and sent one woman to the hospital for smoke inhalation... read more