Breaking Down the Sweet 16 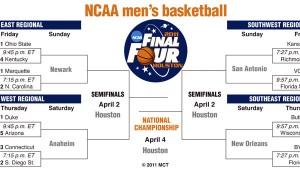 Everybody knew about Jared Sullinger inside for Ohio State. The Buckeyes are becoming known for long-range shooting as well. They had 16 3s — David Lighty had seven — in the third-round win over George Mason. That came two weeks after they hit 14 straight — Jon Diebler had seven — against Wisconsin.

Kentucky freshman guard Brandon Knight hit a game-winner in the closing seconds of his first NCAA tournament game and he followed that up with a a season-best 30 points against West Virginia in the third round. Four freshmen took the Wildcats two rounds farther than this last year and a difficult rookie crop with try to at least match that.

These schools have met five times in the NCAA tournament and the Buckeyes won them all.

Marquette was the 11th of the record 11 Big East teams in the field and the Golden Eagles are just one of two still playing. The Golden Eagles, one of four double-digit seeds still alive, haven’t been to the round of 16 since Dwyane Wade led them to the Final Four in 2003. Darius Johnson-Odom is 7 of 13 from 3 in the two wins, the second of which was over Big East foe Syracuse.

North Carolina has been a different team since Kendall Marshall took over as starting point guard and he had his best game yet, a school NCAA tournament-record 14 assists, against Washington. Fellow freshman Harrison Barnes, who started right away this season, averaged 23 points in his first two NCAA tournament games as the Tar Heels averaged 94.

The only guarantee about this game is that Coach Williams will walk away the winner and loser.

Here’s the difference in the seasons these teams have had. San Diego State beat two teams ranked in the Top 25. Connecticut doubled that number just in winning the Big East tournament in five days and has a national-best total of nine for the season.

The Aztecs got their first NCAA win in the second round and they got by Temple in double overtime despite struggling to a season-low 18 points in the second half. Kawhi Leonard, their best offensive player, has been struggling a bit but had 16 points and nine rebounds against the Owls.

Both of Connecticut’s national championships came from the West Regional. Their star, Kemba Walker, has been on one of college basketball’s most impressive runs, averaging almost 26 points in the seven-game winning streak and running the young offense which has responded to him with balanced support.

While everyone was looking down to see how Kyrie Irving’s toe was reacting to playing for the first time in three months, Nolan Smith gave another of his consistent efforts with 24 points. The Blue Devils were just 5 of 20 on 3s against Michigan, well off their 37.8 percentage from there during the regular season, but a lot like the number in each of their losses this season.

Arizona didn’t have to shake off much rust after missing the tournament last season to end a streak of 25 straight years. Derrick Williams lived up to his star billing by blocking a shot to win the opener and then winning the next game over Texas with a three-point play with 9 seconds left.

The only times these schools have played in the tournament was in the 2001 title game, the third of coach Mike Krzyzewski’s four championships.

The Jayhawks looked strong in every department in their two wins and now they head to a place that has been good to coach Bill Self. Kansas won the 2008 national championship in San Antonio. The Morris twins have combined for 72 points and 41 rebounds so far in the tournament.

Richmond is the highest-seeded team left in the field and the Spiders are in the round of 16 for the first time since 1988. They are on a nine-game winning streak, the school’s longest since 1990-91.

One thing that won’t help Richmond is that Kansas seems intent on making sure a low-seed ambush like Northern Iowa last year won’t happen again.

The list of people in any pool who had this matchup predicted is pretty short.

The Seminoles lead the nation in field goal defense (36 percent) and they allow only 62 points a game, including not letting either opponent reach 60 in the NCAA tournament wins. This is their first time this deep since 1993.

The Rams already have three wins having been part of the first round and they already have the satisfaction of quieting the uproar over their inclusion in the field. The wins over power conference members Southern California, Georgetown and Purdue were by an average of 16.3 points. Their most impressive stat from the win over the third-seeded Boilermakers was that VCU had 26 assists and just four turnovers.

Butler’s run to the championship game last season was surprising. Its trip so far this tournament has been heart-stopping. Matt Howard won the opener against Old Dominion with a tip-in at the buzzer and he capped the wild ending on the win over Pittsburgh with a free throw with less than a second to play.

The Badgers scored 70 points in each of two solid wins in the tournament, something they needed to do to wipe away the dark specter of scoring just 33 points in a Big Ten tournament loss to Penn State. Jon Leuer and Jordan Taylor led the offensive resurgence but coach Bo Ryan will make sure defense is not a far off thought.

This will be a true Midwest game with a lot more screens and rebounds than alley-oops and turnovers.

In case you haven’t heard, BYU’s best player is Jimmer Fredette. He leads the nation in scoring (28.6) and catch phrases based on his name. The Cougars managed to keep winning without suspended forward Brandon Davies and Fredette has made them the favorite of the casual fans.

The Gators started the tournament having to hear how they were overseeded. Point guard Erving Walker stepped up as the star in the win over UCLA but Florida has its usual balance with seven players scoring at least seven points.

It’s been 30 years since BYU, led by Danny Ainge, was in this round of the NCAA tournament. It’s been just four years since Florida defended its national championship.

The Associated Press GOODYEAR, Ariz. — Right-handed starter Johnny Cueto will miss the start of the season because of an... read more