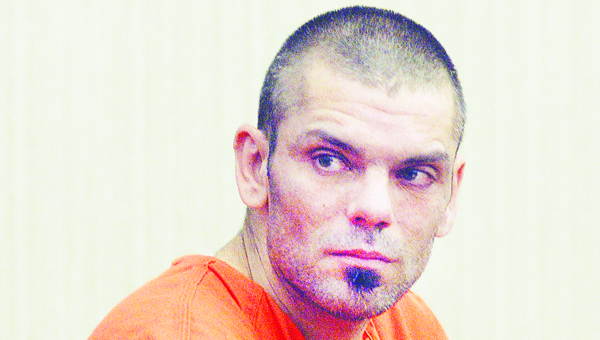 Dennis Clark looks back at the friends and family of Eddie Thibodaux in Lawrence County Common Pleas Court Monday morning before sentencing. THE TRIBUNE/JESSICA ST JAMES

It took what probably seemed like more than just a few seconds to say it.

Sitting in an Ironton courtroom on Monday, Dennis Clark, red-faced from crying, pleaded guilty to the involuntary manslaughter of a man his attorney called his best friend.

Clark, 38, was accused of causing the death of Eddie Thibodaux, 40, also of Ironton. Clark was arrested following an incident at an Ironton bar.

In front of Thibodaux’s sobbing fiancée, sister and other family members, Clark waived his right to a trial by jury that was scheduled for next week. He had previously pleaded not guilty at a hearing in December.

Clark’s attorney, Warren Morford, said his client changed his plea because he was afraid of going to trial, losing and getting the maximum sentence, which is 10 years in prison.

Judge Charles Cooper asked Clark if the information in his plea agreement was truthful to the best of his knowledge. After a long pause, Clark responded, “Yes.”

Clark had been held in the Lawrence County Jail since Nov. 11 after he was arrested for assaulting Thibodaux at the Marlow Grill on South Third Street.

Thibodaux was found unresponsive by the Ironton Police Department after they responded to the reported assault outside of the bar. Thibodaux was then taken to King’s Daughters Medical Center and later transferred to Cabell Huntington Hospital.

Thibodaux died as a result of his injuries on Nov. 23.

Before Clark was sentenced, members of Thibodaux’s family spoke to him and the court.

“I wish you would have told the truth,” cried Paula Thibodaux, the victim’s sister. “There are more people involved in this.”

At the time of Clark’s arrest, a woman was also taken into custody, but released without being charged. Thibodaux’s family contends that that woman was also involved in his death.

Thibodaux’s fiancée, Bertha Fugett, who said they have all been friends for years, also spoke to Clark, pleading for him to “tell the truth” about what happened that night at the Marlow.

“I didn’t do it,” Clark blurted out to Fugett, his face turning red.

Prosecuting attorney Mack Anderson said, after the hearing, that he wasn’t aware of anyone else who was involved in the death of Thibodaux.

Morford spoke on behalf of his client, saying, “Eddie was his best friend. My client didn’t intend to cause the death of anyone, much less a friend of his. He would take that night back in a heartbeat.”

“I think I’m getting punished a little too hard,” Clark said to the judge.

Clark was sentenced to the full nine years, followed by five years of parole. Clark waived his right to an appeal, but asked to be able to see his family one last time before he goes to prison.

Teresa Morrison and Dan Moorefield team up to present the kind of music famed satirist Mark Twain would have enjoyed... read more