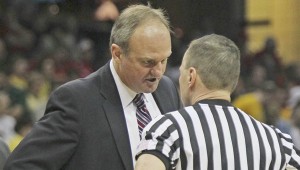 Ohio State head coach Thad Matta, left, talks about a foul call with a game official during the Buckeyes’ 75-46 victory over Texas-San Antonio in their NCAA Tournament clash at the Quicken Loans Arena in Cleveland last Friday. (MCT DIRECT)

COLUMBUS — It’s hard to even recall how bleak things were at Ohio State seven years ago when Thad Matta took over as head basketball coach.

“It wasn’t good,” Matta said of the woeful culture of the program.

Jim O’Brien had been summarily dismissed for giving a recruit money, NCAA investigators were sniffing around campus and ready to drop the hammer on the Buckeyes and on top of everything else there wasn’t all-world talent in the pipeline.

Now the top-ranked Buckeyes (34-2) are the No. 1 overall seed and on a roll coming off second- and third-round wins by a combined 61 points heading into Friday night’s regional semifinal showdown with Kentucky (27-8) in Newark, N.J.

How fitting that when he first arrived at Ohio State, Matta used Kentucky as one of the templates for what he wanted to construct.

“When I came here, I looked at what a Kentucky had done, what a North Carolina had done, and those things weren’t built over night, and not in a decade. It took several decades,” the thinning-haired, 43-year-old native of the aptly named Hoopeston, Ill., said Tuesday.

“When we came in here seven years ago, Ohio State had a 51-percent winning percentage in the Big Ten. We knew we had our work cut out for us in building this thing.”

But how has Matta turn around the program?

Satch Sullinger, father of Matta’s current star post player, Jared, is a legendary high school coach in Columbus. His son, J.J., also played for Matta at Ohio State. He tells a story that sheds light on how Matta treats his players — and why he might just be the best recruiter in the nation.

“Thad Matta coaches the whole kid,” Sullinger said. “When Jim O’Brien was fired, he wrote out a map for the guys to come to his house to give them the news. They’d never been there before. Thad Matta wasn’t in that position (at Ohio State) for two weeks before he had his whole team over to his house. It’s family. He coaches family. He doesn’t coach a basketball team.”

When then-athletic director Andy Geiger ruled early in Matta’s first season that Ohio State would not accept any postseason offer to mitigate potential NCAA penalties, Matta recognized how damaging that was to his budding program. With little to play for, the Buckeyes nonetheless went 20-12 and shocked unbeaten and No. 1-ranked Illinois on a late shot in the regular-season finale.

Shortly after that, Matta began receiving verbal commitments from one of the greatest recruiting classes ever — the so-called Thad Five of Greg Oden, Mike Conley Jr., Daequan Cook, David Lighty and Othello Hunter.

With the possibility of additional NCAA sanctions hanging over the program, Matta provided a unique escape clause to them: If the NCAA added to Ohio State’s penalties, he would release them from their scholarships. It was a remarkably fair and gracious move. Lighty, still a Buckeye, refused the offer outright. The others stuck with Matta and Ohio State.

No more sanctions were levied. In Matta’s second season, the Buckeyes went 26-6 and lost in the second round of the NCAAs. The great recruiting class then came in and led the way to a 35-4 season that ended with a loss to defending champion Florida in the national title game.

Matta, whose teams at Butler, Xavier and Ohio State have always won at least 20 games, piled up records of 24-13, 22-11 and 29-8 heading into this season. Those glittering marks have come despite losing Oden, Conley and Cook, and subsequently fellow prized freshmen Kosta Koufos and Byron Mullens to the NBA draft after one-then-done seasons.

Imagine how good the current Buckeyes might be if Evan Turner, the consensus national player of the year and the No. 2 pick in the NBA draft, had come back for his senior season.

“There’s not a lot of programs that have been hit with the early departures like we have,” Matta said. “But that’s part of it. I’m not making excuses, I’m OK with it.”

The ever-upbeat Matta does not countenance prima donnas or selfish players, either.

“He brings in a lot of guys with great character,” said Jon Diebler, Ohio’s leading schoolboy scorer who has developed into the Big Ten’s leading all-time leader 3-pointers. “He wants people who want to win. That’s the most important thing, guys who can kind of put their egos aside and do what’s best for the team.”

Hang around off the court and you become a cohesive unit off it: That’s the Matta Plan.

Matta is as meticulous in preparation as any coach, and he knows premier players love to run and dunk. So he starts with top players who can do that, then requires that they become fierce defenders to earn playing time. It’s a formula that has worked again and again.

“We have to play the way we think can win games,” Matta said. “I want our guys to enjoy being out there, I want them to play with great confidence, I want them to ’have fun.’ But I do know that winning makes guys have fun.”

In a state that lives and dies with the Buckeyes in football and expends considerably less emotional capital on the basketball squad, Matta has built a solid foundation.

With the football program in turmoil in the wake of coach Jim Tressel violating NCAA bylaws and then covering it up, the basketball program has become a point of pride in Ohio.

Will it ever remotely compare with the wildly popular football team, such a part of the fabric of the state and university? The larger point is that the question is no longer laughable, as it was seven years ago.

“When you’re Ohio State, of course everyone thinks of the Horseshoe and the great football tradition,” said Lighty, who has been a part of a school-record 129 wins in his five seasons. “But I think it’s starting to kind of be a dual-sport school now. As we continue to hopefully get better and make history, things will hopefully change around and we’ll be up there competing with the football team on the same level nationally.”