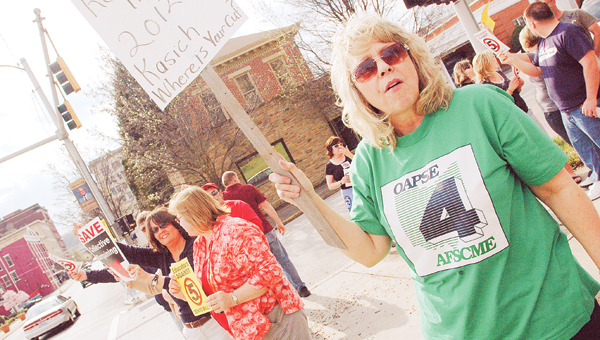 Joy Brumfield, with the Symmes Valley schools, stands on the corner with other union members Tuesday during a rally against SB5.

Jack Nuckols started his teaching career in the early 1970s, making just over $6,000 a year.

When I was first a teacher, I qualified for food stamps,” he said.

Then over the past three decades, Nuckols, who teaches social studies at South Point High School, has watched salaries reach what he thinks is a fair range. That’s why he was out in front of the courthouse Tuesday afternoon with signs and pro-union fervor, wanting to see Ohio Senate Bill 5 go down.

“It has taken us all these years to give us a living wage,” Nuckols said. “We have worked hard for what they want to take away from us.”

Standing on three of the corners of the courthouse lawn about 100 teachers and non-certified staff chanted “O-H-I-O, SB5 has got to go.”

The bill, proposed by the Republican administration, would affect all public employees in the state, not just teachers. Colloquially called the collective bargaining bill, SB 5 would prohibit state agencies and schools from bargaining with their employees. It would also prevent public employers from paying employee contributions to the five state retirement plans.

Sandi Baise has been a bus driver for the past 12 years at the South Point school district and is president of OAPSE Local 480.

“This is not just about the teachers,” she said. “It is everyone in the middle class.”

The rally brought out representatives from the OEA, the teacher’s union, AFSCME and OAPSE.

And not just those associated with county school districts showed up to protest. Union members who work as case managers and social workers for the county’s Job and Family Services joined the rally.

Denise Patton, a case manager with 14 and a half years at JFS, was there “because we want to kill the bill,” she said. “It’s not fair. Kasich is going to take away our bargaining rights. I just wonder if he has even been in a union. We are like family.”

Terri Robinson is president of the AFSCME local that represents the JFS workers.

“This is supposed to be a bill to balance the budget,” she said. “They are putting out propaganda. Our salaries aren’t big and our pension plans aren’t big. It is just not true.”

According to Robinson, the average pension for those covered by unions is $19,000 a year.

“Our benefits that are so ‘cushy’” she said. “I can’t afford to go to a doctor because our copay is so high.”

Former Lawrence County Commissioner Doug Malone stood with the workers, saying he was brought up in a union family.

“I have worked with unions all my life,” Malone said. “I am here as a union supporter. In the last eight years (when he was on commission) they were the most fair group. They took a 10 percent cut because they knew they had to serve.”

And for those who didn’t believe these people meant business, Amy Ferguson, a fourth grade teacher at Symmes Valley, had a message.

“Even though we know that SB 5 is a done deal, … if they don’t work for us, we will vote against them.”