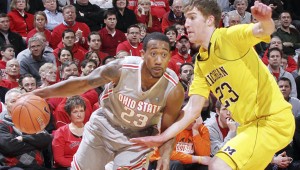 Ohio State’s David Lighty (23) drives against Michigan’s Evan Smotrycz (23) in the first half at the Value City Arena in Columbus. A fifth-year senior, Lighty has been the key to the Buckeyes’ success this season. (MCT DIRECT)

It’s not of a great victory, a stirring last-second shot or even a painful defeat.

It features David Lighty, who had unknowingly broken a bone in his foot earlier in the Dec. 17, 2008, game against Jacksonville, continuing to play.

“He’s got a broken foot. And he’s running back and he makes this incredible effort and steals a pass,” Matta said. “The point (for the players watching it) is, you’re perfectly healthy and you’re not playing hard. This guy’s got a broken foot and this is the energy he gives us.”

But make no mistake about it: The fulcrum of the Buckeyes is the fifth-year senior who’s been through so much.

“I’ve said since the beginning: I love him. I think he’s the (Big Ten) MVP. He probably won’t get it because people aren’t smart enough,” Illinois coach Bruce Weber said earlier this season. “He does everything that you need to win the game. Nothing against Sullinger, he’s tremendous. The other guys are great. But Lighty, to me, is their heart and soul and he’s the reason they win.”

There are no bronze figures outside the team’s home arena. But Matta — who has coached two national players of the year (David West at Xavier, Evan Turner at Ohio State) — believes there should be some kind of a memorial to the tenacity of Lighty.

“I think they should put a statue in front of the Schottenstein Center of David Lighty, just what he’s meant to this program, not only on the court,” Matta said after a win this season. “I’ve always said this, David Lighty, he’s been here for five years and I don’t think he’s ever gotten close to the credit he deserves for the player he is, just the kid he is. You don’t do the things that he’s done during his career here.”

Others might have gaudy scoring averages or make the nightly highlights with a vicious slam dunk. David Lighty wins. Plain and simple. End of discussion.

He enters top-seeded and top-ranked Ohio State’s NCAA regional semifinal game against Kentucky on Friday night in Newark, N.J., as the winningest Buckeye ever. He’s won a remarkable 129 games at Ohio State, and wants nothing than to win four more.

“Like I always say, you stick around long enough you’re going to break some records,” he said. Then, laughing, he added, “I’ve been here eight years.”

Not really. It just must seem like that to opponents.

He came to Ohio State in one of the most acclaimed recruiting classes ever in 2006. Center Greg Oden, shooter Daequan Cook and point guard Mike Conley Jr. all moved on to the NBA after one glittering 35-4 season that ended with a loss in the national championship game. The other three freshmen were all first-round draft picks. Lighty stayed.

The 6-foot-5 swingman was a cornerstone of the next team that went 24-13 and won the NIT. Freshman Kosta Koufos starred on that team, and then went in the first round of the NBA draft after one season.

A consummate lockdown defender against a guard or even a center, Lighty was an integral part of teams that went 22-11 in 2008-09 and 29-8 a year ago. This year, the Buckeyes are 34-2, ended the season ranked No. 1 and won their first two NCAA tournament games by a combined 61 points.

Mixed in there were broken bones in his feet that cost him all but the first seven games of the ’08-09 season and most of this past summer after he sustained the same injury in May, requiring surgery and another grind of rehab.

Despite all the friends who have moved on to bigger and better things, he does not feel left behind.

“No, not at all, because of the person that I am,” he said. “I know people’s dreams, people’s goals, and I’ve gotten to know those guys personally. So, I have no regrets of them leaving. No animosity towards them leaving. I never felt that I was left behind or anything. My time here has been great for me. I’ve grown as a person on and off the court. For me, it’s just what I needed to do, staying here.”

In Ohio State’s 98-66 rout of George Mason in Sunday’s third round, Lighty was the marquee player — or one of them, anyway. He was a spotless 7 for 7 on 3-pointers and scored 25 points. It was a rare moment in the spotlight, in the Cleveland native’s hometown no less.

Still, he is only the fourth-leading scorer at 12.1 points a game. And he doesn’t lead the Buckeyes in assists, rebounds, blocked shots or anything else.

Oh, except for wins.

“You always are going to need Dave,” Buford said. “He brings a lot of energy to this team. He’s the most talkative guy on the floor. He’s the heart and soul to this team.”

Lighty is expected to be taken in the NBA draft, perhaps in the second round, later — by a round and maybe a few years — than some of his former teammates. But he’ll leave Ohio State as one of the most decorated — three Big Ten championships, four trips to the NCAA tournament and one NIT trophy — ever.

The point is, he doesn’t feel as if he’s been lost in the shuffle. Even if he has.

“Maybe sometimes, I guess you could say,” he said. “But I get my due when we get a win. When I’m out there and I’m doing something to help my team win, that’s just enough for me.”

The Associated Press PEORIA, Ariz. — Tim Stauffer was so efficient Wednesday he hoped to pitch another inning. But with... read more