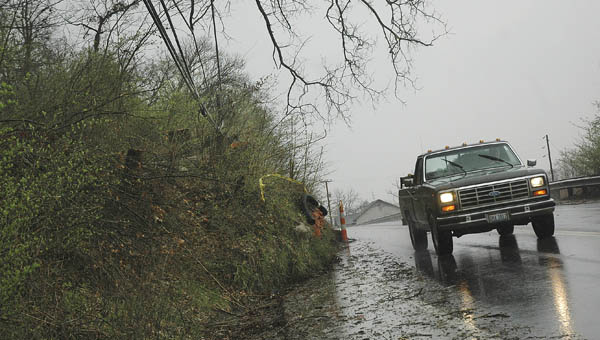 Traffic makes its way back and forth on Rockwood Avenue, also known as State Route 7, in Chesapeake Wednesday afternoon.

CHESAPEAKE — In an effort to get the problem fixed quickly Chesapeake Mayor Dick Gilpin wants the state to declare the hillside slippage at Rockwood Avenue an emergency.

Gilpin is preparing a letter to send to Vaughn Wilson, deputy director of District 9 of the Ohio Department of Transportation.

“Our slip has moved immensely in the last day and a half,” the mayor said. “It has moved 20 inches since Monday.”

Since that segment of Rockwood is inside the village limits, responsibility for its maintenance falls on the shoulders of the village. However, the village has been asking ODOT for help over the past few weeks.

“We don’t have the money to fix it,” Gilpin said. “They know the shape it is in. I think (asking for the emergency) is a formality to do that. They are not ignoring us. They are in the process of assessing the situation.”

Wednesday afternoon ODOT crews moved the lanes closer to the riverside with barrels and signs to allow a temporary cleanup.

“We will continue to maintain traffic in two lanes,” Kathleen Fuller, ODOT District 9 spokeswoman, said. “We are going to put in a suggested speed limit of 20 miles an hour. A maintenance crew is going to go in with a track hoe and clear the area up, remove the material on the road and clean it back up to the edge line. They are not doing any slip repair work.”

The hillside started to slide onto Rockwood about 10 months ago. But with the recent drenching rains the slippage has started coming down at a faster pace.

Recently Frontier, which provides phone service to the village, cut down trees on that section of the hill to keep the trees from falling on the phone lines.

If ODOT determines the slip is an emergency situation, it could step in and administer the repair work contract for the village, according to Fuller.

Right now ODOT is in the process of finishing up paperwork needed to conduct core drillings into the hillside to determine the type of material there, Fuller said.

“We are hoping to get some core drilling done if not late this week or next week,” she said. “We are still waiting on a letter requesting assistance and perhaps legislation to go through the village council. Since this is still a matter for the village, it is their responsibility. We do have to have the letters and appropriate paperwork requesting our assistance.”

Eli Johnson, who portrayed “Squealer the Pig,” is cross examined by Ben Myers, a defense attorney, during the mock trial... read more